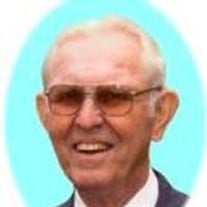 Robert J. Weberding, age 85 of Batesville, died Sunday, February 6, 2011 at his home. Born December 10, 1925 in Batesville, he is the son of Frances (Nee: Fragge) and Anthony Weberding. He married Stella Bedel June 25, 1947 at St. Anne’s Church in Hamburg, Indiana. Bob served in the army during World War II. He saw extensive action in the Ardennes, Rhineland and Central Europe in Company H of the 311th Infantry Regiment where he earned three Bronze Stars and his unit earned the Distinguished Unit Badge. Following the service, he was maintenance supervisor at St. Louis Church, School and Cemetery for 41 years. He also was a bus driver for St. Louis School and the Batesville School Corporation 35 years.His family indicated that keeping things running smoothly at St. Louis and the cemetery well maintained was an important part of his life. Bob relaxed with several activities in his spare time. In his younger years he liked riding horses. At home he kept his own lawn well maintained as well and spent summers raising his vegetable garden. Often times he would be found out chopping wood and also liked feeding and watching the birds around his house. Bob also loved to dance. Many will remember seeing Bob and Stella regularly on Saturday nights at the Eagles Club dances. Having his family and grandchildren around was time he truly treasured.He is survived by his wife Stella; daughters and son-in-laws Kathryn and Steve Moore of Greensburg, Indiana, Deborah and Jack Mauzy of New Albany, Indiana, Jane and Steve Keeth of Dixson, Missouri; sons and daughter-in-laws Gary and DeVota Weberding of Sunman, Dennis (Whitey) and Sandy Weberding, Donald (Dinger) and Carol Weberding, Anthony (T.W.) and LeNita Weberding and Kenneth and Kim Weberding, all of Batesville; sisters Ruth Hoff and Mary Luhring of Batesville; brother Charles of Cincinnati, Ohio; 11 grandchildren and 11 great grandchildren. In addition to his parents, he is also preceded in death by sister Cleona Weberding; brothers William, John and Anthony Weberding as well as one grandson.Visitation is Tuesday, February 8th, from 4-7 at the funeral home. Funeral services are 10:30 a.m. Wednesday, February 9th, at St. Louis Church with Rev. Stephen Akange officiating. Burial will be in the church cemetery with Military Graveside Rites conducted by the Batesville V.F.W. Post #3183 and the Prell-Bland American Legion Post #271. The family requests memorials to the St. Louis Cemetery Fund or St. Louis School Tuition Angels.

The family of Robert J. Weberding created this Life Tributes page to make it easy to share your memories.

Send flowers to the Weberding family.