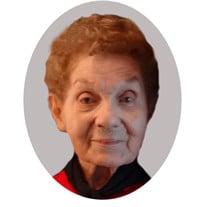 Robertine M. “Bobbi” Burke, age 94 of Batesville, died Sunday, June 17, 2018 at St. Andrew’s Health Campus. Born November 27, 1923 in Los Angeles, California, she is the daughter of Rose (Nee: McGranahan) and Heber Stromness. She married Roger Burke September 16, 1944 in Cincinnati, Ohio and he preceded her in death October 5, 2010. She was a secretary for the Hill-Rom Company 16 years before retiring in 1985. Bobbi’s family explained that she was an excellent cook, making only what was necessary to feed the family, so left over’s were rare. An even better baker, her pies were hard to beat, especially the pecan pies. Her strawberry shortcake will also be missed. Bobbi liked watching Purdue basketball, golf and the Hallmark Channel as well as the old movies on Turner Classic Movies. She and Roger enjoyed traveling and some of their favorite trips included Germany, Switzerland, Australia and a couple of visits to Hawaii. The kids described her as the perfect mother and doting grandmother, but joked that during trying times she would look to the heavens and say, “Patience and fortitude!” She is survived by her daughters Barbara Eder of Bodalla New South Wales, Australia, Christine Ruehl of Crestview Hills, Kentucky; sons Roger of Obetz, Ohio, Steve of Ithaca, New York; eight grandchildren and eight great grandchildren. She is preceded in death by her husband and parents. Visitation is Friday, June 22nd, from 9 – 11 a.m. at the funeral home. Funeral services follow at 11:30 a.m. at St. Louis Church with Rev. Stan Pondo officiating and burial will be in the church cemetery. The family requests memorials to St. Louis School.

The family of Robertine M. "Bobbi" Burke created this Life Tributes page to make it easy to share your memories.

Send flowers to the Burke family.