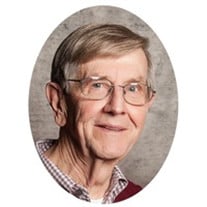 Ronald H. Harmeyer, 80, of Batesville, passed away Thursday, April 5, 2018. The son of Ben and Clara (Ziegler) Harmeyer was born in Deer Park, Ohio on June 27, 1937. He graduated from St. Louis School and attended Batesville High School. At 17, he joined the Navy and served in the Pacific. In 1959, he returned to Batesville to work with his father at Harmeyer’s Market. Ron became the owner in 1965 and always took pride in maintaining the history of the corner store. He worked six days a week—every week—for decades. He gave many local kids their first job and the experience of working for a real boss.   In 1960, he married Margie Schoettelkotte of Lawrenceville, Indiana. In 1989, Ron joined the Board of Directors at the Napoleon State Bank, a position he held for 22 years. After retiring, Ron continued to spend as much time as possible at the store. Throughout his life he enjoyed traveling, sharp cars and reading. He is survived by wife Margie, son Steve (Amy) of Batesville; daughter Nancy (Brian Young) of Los Angeles, California; grandchildren Will and Betsy Harmeyer of Batesville, brother Ralph (Bernice) Harmeyer of Batesville and sister Ruth Kunkel of Greensburg, Indiana.  Visitation will be held on Sunday, April 8th from 1 - 4 p.m. at the funeral home. Funeral services will be held at 10:30 a.m. on Monday, April 9th at St Louis Catholic Church with Rev. Larry Schoettelkotte officiating. Burial will be in the church cemetery with military honors conducted by the Batesville V.F.W. Post #3183 and the Prell-Bland American Legion Post #271.  Memorial donations may be directed to Batesville Fire and Rescue or Margaret Mary Hospice.

The family of Ronald H. Harmeyer created this Life Tributes page to make it easy to share your memories.

Send flowers to the Harmeyer family.