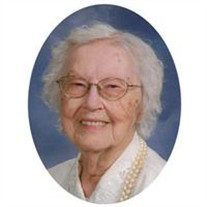 Roselyn C. Wessel, age 95 of Batesville, died Sunday, January 29, 2017 at St. Andrew’s Health Campus. Born June 22, 1921 in Franklin County Indiana, she is the daughter of Anna (Nee: Amberger) and George Kuntz. She married Lawrence Wessel June 22, 1946 at St. Mary’s of the Rock Church and he preceded her in death December 9, 2005. Being a farm wife, Roselyn’s days were filled with raising her family and helping Lawrence with the farm. Gardening was both a necessity and a passion. A large garden was a necessary task each year to help feed the family, while working in her flower beds were a passion she enjoyed. Another passion was music and dancing. Throughout her life she had a love for music, especially big band and dancing. Naturally, Lawrence Welk was a favorite program. The family remembers a trip to Branson where she accepted an invitation to come up on stage with Lawrence and dance to the music of the Glen Miller Orchestra. In fact, it was at a local dance that she and Lawrence first met. According to her family, she loved her birds, especially Cardinals, which she referred as her “red birds.” They also remember her homemade bread and pies. Over the years she and Lawrence traveled a little, mostly to the western part of the country. Las Vegas and a trip to Germany were probably her favorites. Roselyn is survived by daughters and son-in-laws Lucy and Dan Mikula of Indianapolis, Donna and Joe Wietlisbach of Batesville, Lorraine and Jerre Hampson of Batesville, Mary and Tom Hornbach of Indianapolis, Jane and Tim Scheidler of Milhousen, Indiana; sons and daughter-in-laws David and Mary Jean Wessel, Kevin and Kay Wessel, all of Batesville; brother Robert Kuntz of Brookville, 23 grandchildren and 28 great grandchildren. In addition to her husband and parents, she is also preceded in death by brothers Lloyd, Arnold, Clifford, Francis and Eugene Kuntz; one grandchild and one great grandchild. Visitation is Wednesday, February 1st, from 4 – 7 p.m. at the funeral home. Funeral services are 11 a.m. Thursday, February 2nd at St. Louis Church with Rev. Stan Pondo officiating. Burial will follow in the church cemetery. The family requests memorials to Southeastern Indiana Right to Life or St. Louis Cemetery Fund.

The family of Roselyn C. Wessel created this Life Tributes page to make it easy to share your memories.

Send flowers to the Wessel family.