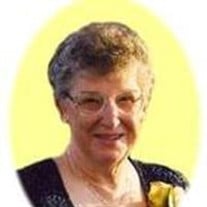 Rosemary C. Voegele, age 80 of Batesville, died Thursday, January 12, 2012 at St. Andrew’s Health Campus. Born January 2, 1932 in Batesville, she is the daughter of Mary (Nee: Wise) and William Firsich. She married John Voegele July 4, 1952 at St. Louis Church and he preceded her in death on December 15, 1995. Rosemary worked at Federal-Mogul as an assembler and inspector for 25 years before retiring in 1994. Rosemary was an avid sports fan and regardless of the season, she rarely missed a game or event her children and grandchildren participated in. She also liked to watch college basketball, the NBA, old movies (Dean Martin and Fred Astaire were among her favorites), the Game Show Network, Matlock and Dancing with the Stars. Summer was her favorite time of the year and her children remember how she loved to go for rides out in the country. They also remember her fried chicken and that famous potato salad family and friends alike always requested her to make.She is survived by her daughters Christy Thompson of Greensburg; Tina Deskins of Cromwell, Kentucky, Rose Ellinghausen of Manchester, Indiana, Debbie Ertel of Sunman; sons John of Aurora, Indiana, Keith of Oldenburg, George of Batesville, Randy of Lake Elsinore, California, Dean, Phillip, Warren and Steve, all of Batesville; sister Betty Burkhel of Lemon Grove, California; brothers John of Anaheim, California, James of Wasco, California; 18 grandchildren and 10 great grandchildren. In addition to her husband and parents, she is also preceded in death by her daughter Cathy Ostendorf and step brother Gerald Linkin.Visitation will be Monday, January 16th, from 4-7 p.m. at the funeral home. Funeral services are 11 a.m. Tuesday, January 17th, at St. Louis Church with Rev. Randy Summers officiating. Burial will follow in the church cemetery. The family requests memorials to the American Heart Association.

The family of Rosemary C. Voegele created this Life Tributes page to make it easy to share your memories.

Send flowers to the Voegele family.