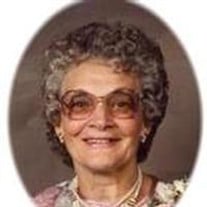 Rosemary Wurtz, age 86 of Batesville, died Saturday, April 6, 2013 at Manderley Health Care Center in Osgood. Born June 2, 1926 in Morris, Indiana, she is the daughter of Rose (Nee: Schneider) and Thomas Merkel. She married Malcom Wurtz October 4, 1947 at St. Anthony’s Church in Morris. She owned and operated her own beauty shop as well as working 30 years in housekeeping for Hillenbrand Industries. Faith was important to Rosemary. In addition to Sundays, she attended services most weekdays too. Her family teased that if the church bells rang, mom was there. She also donated countless hours helping with festivals, events and church programs. Her family fondly remembers her delicious fried chicken, cream pies and bread. Saturday was baking day and the whole house would be filled with the aroma of yeast and fresh baked bread. Each year she raised a large garden and canned what she grew. Along with her garden, she also raised flowers and took great pride in her flower beds around the yard. Rosemary was a hard worker. In addition to running a beauty shop out of her home, she worked at Hillenbrand’s until she was 70, but continued doing hair for ten more years before retiring in 2006. In her free time, Rosemary played 500 with a group of friends in a card club for years, liked playing the dice game Bunco, was a Reds fan and watched boys basketball. What she enjoyed most was spending time with her grandchildren and great grandchildren. She is survived by her daughters Kathy Back of Hamilton, Ohio, Jane Wood of Hamilton, Ohio, Connie Napier of Greensburg, Renee Simon of Napoleon; son Tim Wurtz of Batesville; brothers Thomas Merkel of Oldenburg, Leo Merkel of Morris; nine grandchildren and seven great grandchildren. In addition to her husband and parents, she is also preceded in death by sisters Martha Gehring, Theresa Forthofer and brother Sylvester “Butch” Merkel. Visitation is Monday, April 8th, from 5-7 p.m. at the funeral home. Funeral services are 11 a.m. Tuesday, April 9th, at St. Anthony’s Church with Rev. Pascal Nduka officiating. Burial will be in the church cemetery. The family requests memorials to the Morris Fire Department or the St. Maurice Church Building Fund (Napoleon, IN).

The family of Rosemary Wurtz created this Life Tributes page to make it easy to share your memories.

Send flowers to the Wurtz family.