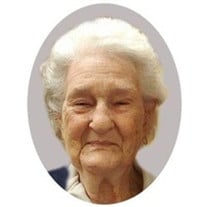 Ruth T. Kramer, age 95 of Batesville, died Saturday, December 30, 2017 at St. Andrew’s Health Campus.  Born January 16, 1922 in Batesville, she is the daughter of Olivia (Nee: Merkel) and Andrew Wintz.  She married Harold Kramer May 13, 1944 at the St. Louis Parsonage and he preceded her in death September 23, 1980.  Ruth worked 18 years as a dispatcher for the Batesville Police Department before retiring in 1995 and was a member of St. Louis Church.    A loving and devoted mother, she enjoyed spending time with her family.  An excellent cook and baker, for years she cooked a big lunch every day for her sons that might include fried chicken or meat loaf with all the trimmings.  She also had special treats at the ready for the grandkids when they’d come by.  Her apple pies, poor man cakes, cinnamon rolls, noodles and grits will be sorely missed.  The family teased that you’d often hear mom say, “Now wait just a minute”, “What the Sam hell” and “Don’t you dare.”  It was common to see Ruth out walking since she never learned to drive and could be found on her porch swing rain or shine.  Other interests included bingo and cards. She was an avid 500 player and a member of several card clubs.  Ruth also enjoyed bus trips with neighbors and friends.  Among one of her favorite trips was a visit to Washington D.C. to see the cherry blossoms in bloom.   She is survived by her daughters Yolanda (Greg) Thayer of Osgood, Lisa (Danny) Knight of Carmi, Illinois, LeNita (Tony) Weberding of Batesville; sons Steve (Schere) of Guilford, Indiana, Ron (Jane) of Oldenburg, Mike (Deb) of Batesville; nineteen grandchildren; twenty four great grandchildren and one great great grandchild.  In addition to her husband and parents, she is also preceded in death by sister Mary Grace Tebbe and brothers Francis, Clarence, Urban and infant August Wintz.    Visitation is Wednesday, January 3rd, from 4 – 7 p.m. at the funeral home.  Funeral services are 11 a.m. Thursday, January 4th at St. Louis Church with Rev. Stan Pondo officiating.  Burial will follow in the church cemetery.  The family requests memorials to St. Jude Children’s Hospital.

The family of Ruth T. Kramer created this Life Tributes page to make it easy to share your memories.

Send flowers to the Kramer family.