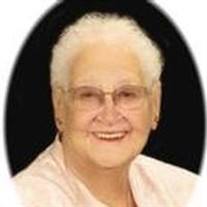 Ruth A. Wintz, age 84 of Batesville, died Thursday, March 1, 2012 at her home. Born May 14, 1927 in Friendship, Indiana, she is the daughter of Alta (Nee: Runner) and Harry Westmeyer. She married Francis Wintz October 21, 1944 at St. Louis Church in Batesville and he preceded her in death December 14, 2000. Ruth was the food purchasing agent and supervisor at Margaret Mary Hospital for 25 years before retiring.To say Ruth liked bingo would be a huge understatement. Bingo fanatic is probably a better description. She attended the first bingo ever held at St. Louis Church and attended weekly until shortly before her death. An avid Solo and “500” player, she could count cards and if she ever caught you cheating, you’d never play with her again. But she also had a playful side and loved to play pranks and practical jokes on her co-workers and family. Her family indicated she was a STAUNCH Democrat. She used to say, “If God was a republican and the devil was a democrat…………well, she’d still have to vote democrat. Hobbies included quilting, cross stitching, watching college sports and working crossword puzzles. An excellent cook, her family loved Ruth’s glorified rice (rice pudding), banana pudding and her roast beef, but turkey was made only once a year. So if you got it for Thanksgiving, you knew something else would be on the menu for Christmas. As her neighbors can tell you, Christmas was her favorite time of the year. She loved to decorate for the holidays. Her son joked that by the time mom finished, there were enough lights to land an airplane on the lawn. Although Coke a Cola was a close second, her true passion was being with her grandchildren.Ruth is survived by her son Bill Wintz of Batesville; daughter Mary Kay Hershberger of Greenwood, Indiana; seven grandchildren and three great grandchildren. In addition to her husband and parents, she is also preceded in death by her son Jim Wintz and sisters Dorothy Borchelt and Mabel and Thelma Shadday. Visitation is Sunday, March 4th, from 1-4 p.m. at the funeral home. Funeral services are 10:30 a.m. Monday, March 5th at the funeral home with Rev. Charles Flory officiating followed by burial at St. Louis Cemetery. The family requests memorials to Home Health Care of Margaret Mary Hospital or the Batesville Food Pantry.

The family of Ruth A. Wintz created this Life Tributes page to make it easy to share your memories.