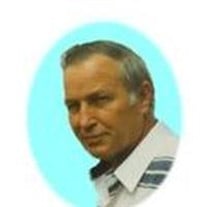 Sharon L. “Butch” Wolferst, age 70 of Batesville, Indiana, died Tuesday, November 4, 2008, at his residence. Born February 16, 1938 in Batesville, he is the son of Dora (Nee: Freeland) and Benjamin Wolferst. He served in the Army and was stationed in Germany. He married Renate Lehr July 26, 1963 in Harthousen, Germany. He is survived by his wife Renate, daughter Ilona Kusnierz of Cincinnati, Ohio; son David of Kokomo, Indiana; brothers Jack Maple of Batesville, Jim Maple of Greensburg and five grandchildren. In addition to his parents, he is also preceded in death by sisters Dorothy Strawn, Fay Bohman, Rita Carr, Cherry Jo Lamping and brother Dayle Maple. Butch was a supervisor for Hill-Rom, retiring in 2003 after 46 years. He was also a member of St. Louis Church and the Prell-Bland American Legion Post #271. Butch enjoyed gardening and especially took pride in his tomatoes. He liked to relax on the porch during warm weather and when cold weather came, he moved inside where he spent time putting together jigsaw puzzles or reading. He liked history and was an avid reader of books about history. When not at home, Butch was active in the Legion where he served as historian and for many years he handled cooking duties in the concession stand during Legion Baseball games. His true passion though, was being with his family. He enjoyed nothing more than he and Renate spending time with their children and grandchildren. A rosary service will be at 4:45 p.m. Thursday, November 6th, at the Weigel Funeral Home with visitation following until 7 p.m. Funeral services are 10 a.m. Friday, November 7th, at St. Louis Church with Rev. Dennis Duvelius officiating. Burial will be in the church cemetery with Military Graveside Rites conducted by the Prell-Bland American Legion Post #271 and the Batesville V.F.W. Post #3183. The family requests memorials to the Prell-Bland American Legion, Hospice of Margaret Mary or the American Lung Association.

The family of Sharon L. Wolferst created this Life Tributes page to make it easy to share your memories.

Send flowers to the Wolferst family.