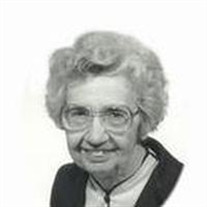 Sr. Jane Anne Speier, formerly Sr. Marie Adelaide, age 87 of the Srs. of St. Francis Convent in Oldenburg, Indiana, died Wednesday, May 28, 2008 at the convent. Born September 11, 1920 in Cincinnati, Ohio, she is the daughter of Matilda (Nee: Schmidt) and Edward Speier.Sr. Jane Anne entered the convent September 8, 1938 and made her final vows August 12, 1944. She was a teacher/principal and librarian at St. Anthony's in Dayton, Ohio; Holy Trinity in St. Louis, Missouri; St. Aloysius in Covington, Kentucky and St. Rita's, Scecina's and Marian College in Indianapolis, Indiana. She retired to the Motherhouse in 1991 serving as librarian for Oldenburg Academy and also as a staff member of the Motherhouse Communication Office.Sr. Jane Anne is survived by her sister Sue Streritz and brother Rev. Tom Speier O.F.M., both of Cincinnati, as well as nieces and nephews. In addition to her parents, she is also preceded in death by her brother Robert Speier.Visitation is Saturday, May 31st, from 9-11 a.m. at the Motherhouse Chapel. Funeral services follow at 11 a.m. with Rev. Carl Hawver O.F.M. and Rev. Tom Speier O.F.M., officiating. Burial will be in the convent cemetery. Memorials may be made to Srs. of St. Francis Convent, P.O. Box 100, Oldenburg, IN, 47036.

The family of Sr. Jane Anne Speier created this Life Tributes page to make it easy to share your memories.