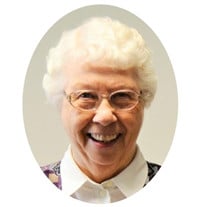 Sr. Bernetta Stuhrenberg, age 93 of the Sisters of St. Francis in Oldenburg, Indiana, died on September 6, 2021 at the convent. Born as Clara Stuhrenberg on August 1, 1928, in Duncombe, Iowa to Mary (Nee: Naderman) and Henry Stuhrenberg, she was the fifth of seven children born into the family that included six girls and one boy. Wanting a Catholic education for their children, Sr. Bernetta’s parents made the difficult decision to leave their productive farm in Iowa and relocate to Indiana where the family settled near Millhousen and became parishioners of Immaculate Conception parish, with the children attending the parish school. She would later graduate from Oldenburg Academy, Miller’s Business College in Cincinnati and Marian University in Indianapolis. While Sr. Bernetta felt called to religious life, before committing, she explored several areas of employment but, experienced a restless longing for something more satisfying. At the time she was living in Cincinnati with her sister, Addie, who felt the same. Sr. Bernetta found her “something more” with the Oldenburg Franciscans, where one of her sisters, Sr. Margaret Mary, was already a member. Addie joined the Trappistines nuns in Massachusetts and the three sisters kept in contact as permitted during the ensuing years. On August 12, 1960, Sr. Bernetta made her final vows as a Franciscan. During her teaching career she taught all eight grades at St. Louis in Batesville; Holy Name in Indianapolis; St. Vincent in Vincennes, Indiana; St. Lawrence in Lawrenceburg, Indiana; St. Aloysius in Delhi, Ohio and St. James in White Oak, Ohio. Following the changes of Vatican II, she chose to pursue parish ministry and served at St. Catharine Parish in the Cincinnati neighborhood of Westwood from 1976-1990. After that, she stayed in Cincinnati working two years in private home care and then became an aftercare specialist at Rebold Funeral Home from 1992-1999. She returned to Oldenburg in 1999 where she visited with patients at Margaret Mary Health and two area nursing homes while also ministering to the homebound in the area. Sr. Bernetta also volunteered in the Development Office and ministered to the infirmed sisters in St. Clare Hall at the convent. When asked about some of her favorite memories, she once noted, “While serving as a pastoral minister at St. Catharine’s in Cincinnati, I began visiting church members, especially the homebound. At first, I had a dozen or more names on my list to visit, and 15 years later the list expanded to 125. Many volunteers were able to help. I felt needed and deeply appreciated. People seemed comfortable with me and it was a joyful moment when one or the other would reconnect with our parish.” Survivors include her sister Rosemary Maschino and numerous nieces and nephews. In addition to her parents, she is also preceded in death by sisters Mary Ann Wenning, Sr. Margaret Mary Stuhrenberg OSF, Sr. Henriette (Addie) Stuhrenberg OCSO, Barbara Sandhage and brother Albert Stuhrenberg. Visitation is Tuesday, September 14th, from 1 – 3 p.m. at the convent chapel. Funeral services follow at 3 p.m. with Rev. Martin J. Sandhage officiating and burial in the convent cemetery. Guests who have been vaccinated are welcome to attend but masks are mandatory. For those unable to attend, services will be live-streamed at https://youtu.be/1DcBXVkWn28. Memorials may be made to the Srs. of St. Francis, P.O. Box 100, Oldenburg, Indiana, 47036 (www.OldenburgFranciscans.org)

Sr. Bernetta Stuhrenberg, age 93 of the Sisters of St. Francis in Oldenburg, Indiana, died on September 6, 2021 at the convent. Born as Clara Stuhrenberg on August 1, 1928, in Duncombe, Iowa to Mary (Nee: Naderman) and Henry Stuhrenberg, she... View Obituary & Service Information

The family of Sr. Bernetta Stuhrenberg created this Life Tributes page to make it easy to share your memories.

Sr. Bernetta Stuhrenberg, age 93 of the Sisters of St. Francis...

Send flowers to the Stuhrenberg family.