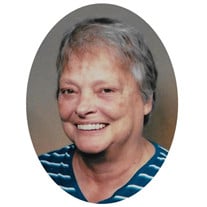 Sr. Sharon Marie Blank, age 72 of the Sisters of St. Francis in Oldenburg, died Friday, July 5, 2019 at St. Vincent Hospital in Indianapolis, Indiana. Born August 1, 1946 in Louisville, Kentucky, she is the daughter of Viola (Nee: Hillebrand) and Harold Blank. She was the second of three children. Sr. Sharon Marie taught at the Immaculate Conception in Old Monroe, Missouri; St. Wendel in Wadesville, Indiana and Our Lady of Perpetual Help in New Albany, Indiana, serving as principal and organist at the latter two. In 2000 she moved to Mother of Sorrows in Louisville, Kentucky where she served as principal and in 2006 she relocated to St. Gabriel the Archangel in Louisville, where she was teaching until her sudden passing. Sr. Sharon Marie enjoyed encouraging her students in extra-curricular activities, especially sports. While serving as principal at Our Lady of Sorrows, she was interviewed by a local newspaper reporter and commented, “Team sports provide a stage where many of Christ’s lessons can be taught, such as sacrificing one’s self for the good of the team, grace under pressure, teamwork, reconciling misunderstandings, forgiving hurts and humbleness even in victory. Competitive sports need to be placed in our Catholic Christian perspective. The drive to win at all cost should not be tolerated. Violence on the field, poor sportsmanship, excessive negative reinforcement and inappropriate behavior should be eliminated. The emphasis should be on positive reinforcement, skill development, discipline and good sportsmanship. We still like to play our best, but our success is predicated not on winning games but primarily on instilling the Christian values we profess. While we play to compete, we also play to win at teaching our kids the Christian values of courage and poise in the midst of adversity, honor and respect of self and others, and sacrificing and serving one another.” She is survived by her sisters Sr. Sharon Blank, O.S.F. and Sharlene Bruns. She is preceded in death by her parents. Visitation is Thursday, July 11th from 1 -3 p.m. at the convent chapel. Funeral services follow at 3 p.m. with Rev. John Fink officiating and burial will be in the convent cemetery. Memorials may be made to the Sisters of St. Francis, P.O. Box 100, Oldenburg, Indiana, 47036 (www.OldenburgFranciscans.org). For online condolences go to www.weigelfh.com.

The family of Sr. Sharon Marie Blank O.S.F. created this Life Tributes page to make it easy to share your memories.

Send flowers to the Blank family.