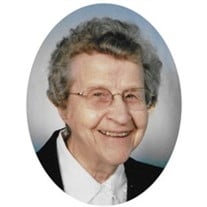 Sr. Wilhelmina Burkemper, age 93 of the Srs. of St. Francis in Oldenburg, died Saturday, January 6, 2017, Founding Day for the convent.  Born January 25, 1924 in Old Monroe, Missouri, she is the daughter of Rose (Nee: Wehde) and Alexander Burkemper.  Named Virginia Rose, She grew up the sixth of ten children.   From their farm, the family could see Immaculate Conception school and the kids walked along the railroad tracks learning to balance themselves, meeting friends along the way as they came and went to school.  On January 1, 1940, she said her goodbyes as she boarded the train to take her to Oldenburg and the Srs. of St. Francis.  She remembers it as being a cold day with snow the whole trip.  She took the name Sr. Wilhelmina after her grandmother who was also her godmother.  The Christian atmosphere she grew up in and the friendly Sisters at Immaculate Conception led her to choose Franciscan life.  Upon her arrival to Oldenburg, her classes began a few days later and she recalls her job was to keep the wooden corridors and main stairway clean.   Sr. Wilhelmina taught primary school for 49 years in the inner cities of Ohio, Missouri and Montana. She especially enjoyed teaching and learning from the African American and Native American students.  She also enjoyed gardening and established many beautiful flower gardens.  After retiring from teaching in 1991, she returned to the Motherhouse, serving as the congregation’s archivist until 2008.  In later years she commented, “This journey to the past and meeting all the Sisters has filled me with awe and wonder at the courage, faith, dedication and perseverance that has brought me this far.”   She is survived by sister Roseann Coose along with numerous nieces and nephews.  In addition to her parents, she is also preceded in death by siblings Sylvester, Blanche, Catherine, Evelyn, Teresa, Arthur, Victor and Christopher.  Visitation is Wednesday, January 10th, from 1 – 3 p.m. at the convent.  Funeral services follow at 3 p.m. with Rev. Robert Weakley O.F.M. officiating and burial will follow in the convent cemetery.  Memorials may be made to the Srs. of St. Francis, P.O. Box 100, Oldenburg, IN, 47036 (www.OldenburgFranciscans.org).

The family of Sr. Wilhelmina Burkemper O.S.F. created this Life Tributes page to make it easy to share your memories.