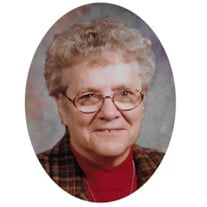 Sr. Dolores Meyer, formerly Sr. Joseph Mary, age 88 of the Sisters of St. Francis in Oldenburg, died April 3, 2022 at Reid Health in Richmond, Indiana. Born on February 7, 1934 in St. Louis, Missouri, she was the eldest of two children born to Helen (Nee: Lenkiewicz) and Alvin Meyer. Dolores and her younger brother Alvin, better known as “Martin”, grew up in St. Louis, where they attended several grade schools, including St. Liborius, St. Augustine and Holy Cross before entering St. Liborius High School. Later Dolores would transfer to the Immaculate Conception Academy in Oldenburg as an aspirant. She entered the Franciscan Community on September 8, 1951 and took final vows on August 12, 1957. She earned a Bachelor’s in education from Marian University and through the years completed certifications at Harris Teacher’s College, Washington University and Montana State College. Later she earned her certification in pastoral ministry from Marillac College in St. Louis. Schools Sr. Dolores taught in Indiana included Little Flower, St. Mark’s and St. Mary’s in Indianapolis, St. Michael’s in Brookville, Sacred Heart in Clinton and Catholic Central in New Albany. Missouri schools included Sacred Heart in Troy and both Holy Trinity and Holy Cross in St. Louis and in Montana St. Xavier in St. Xavier and St. Charles in Pryor before serving as a principal at St. Xavier. In 1980, Dolores served at the Director of Religious Education and later Pastoral Minister at St. Joseph Parish in Evansville, Indiana. In 1987 she began serving as Pastoral Minister at Immaculate Conception Parish in Old Monroe, Missouri where she would remain for 23 years until returning to Oldenburg for her retirement. In an interview about her life as a Franciscan, Dolores noted, “What an exciting day September 9, 1951 turned out to be! I was entering the convent, joining the Sisters of St. Francis. As S. Norma Rocklage and I stood together on the train’s caboose waving goodbye to our families and pulling away from the St. Louis train station, there was a sad tug at our hearts, but we also felt the strong comfort of the Lord knowing we were following His call, His invitation. When I entered the convent, I felt I was there to follow God’s lead. Wherever I was sent was coming from God, and I was so happy to go. I’m pretty laid back so I got along with all those I lived with and learned a lot from each of them and the principals I worked with. While teaching, I especially loved the little ones for their simplicity and their excitement about whatever we were doing. They were so full of joy! In Missouri, I was mostly in pastoral ministry. I loved helping others, and many people helped me. I liked being in new places and learning new things as I followed God’s path.” Sr. Dolores is survived her brother Alvin “Martin” Meyer of St. Louis. She is preceded in death by her parents. Visitation will be Friday, April 8th from 1:30 – 3:00 p.m. at the convent chapel. Funeral services follow at 3:00 p.m. with Fr. Michael Chowning, OFM, officiating and burial will be in the convent cemetery. Guests who have been vaccinated are welcome to attend but masks are mandatory. For those unable to attend, services will be live-streamed at https://youtu.be/KDSQJ5j3Qos. Memorials may be made to the Srs. of St. Francis, P.O. Box 100, Oldenburg, Indiana, 47036 (www.OldenburgFranciscans.org).

The family of Sr. Dolores Meyer OSF created this Life Tributes page to make it easy to share your memories.