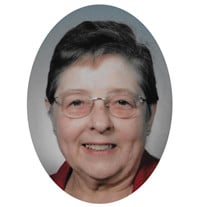 Sr. Donna DeMange, formerly Sr. Mary Janet, age 81 of the Sisters of St. Francis in Oldenburg, died Friday, March 29, 2019 at the convent. Born May 21, 1937, in Dayton, Ohio, she is the daughter of Rose (Nee: Reichenberger) and Ralph DeMange. Sr. Donna attended Our Lady of Mercy grade school and one year at Julienne High School in Dayton before coming to Oldenburg as an aspirant. The eldest of the four DeMange children met the Franciscan Sisters while in grade school and often spoke about her early friendship with Sisters Gerald Gaynor, Dominica Doyle and Lavonne Long, and noted, “As I got to know the Sisters, the desire to be a Franciscan was just always there.” She earned a B.A. in Elementary Education from Marian University, and three Master’s degrees; in Elementary Mathematics from Clarke College, in Pastoral Counseling and in Religious Studies from the Athenaeum of Ohio. An elementary teacher and principal for 25 years at schools in Illinois, Indiana and Ohio, in 1981 she enrolled in clinical pastoral care courses and would serve 32 years in that position for the Mercy Franciscan Hospital before retiring in 2014. In reflecting on her years as an educator, Sr. Donna fondly recalled how one of her students won first place in a Scholastic Magazine contest as he composed a song that he sang and accompanied by guitar. His prize included a round-trip for four to Portugal. Sr. Donna had always dreamed of “traveling to far-away places,” and was honored to be chosen to accompany his group in the trip. While she treasured her memories in the classroom and the many young students she taught, she also found great spiritual fulfillment while ministering in pastoral care. In the words of St. Francis, “It is no use walking anywhere to preach unless our walking is our preaching.” Sr. Donnas’ walking was her preaching as she reached out to the minds and hearts of many. She is survived by her sister Judy Bon of Dayton, Ohio and brother Thomas DeMange of Bellbrook, Ohio. In addition to her parents, she is also preceded in death by her brother William DeMange. Visitation is Friday, April 5th, from 1 -3 p.m. at the convent chapel. Funeral services follow at 3 p.m. with Rev. Hans Gruenbauer officiating and burial will follow in the convent cemetery. Memorials may be made to the Sisters of St. Francis, P.O. Box 100, Oldenburg, Indiana, 47036 (www.OldenburgFranciscans.org).

Sr. Donna DeMange, formerly Sr. Mary Janet, age 81 of the Sisters of St. Francis in Oldenburg, died Friday, March 29, 2019 at the convent. Born May 21, 1937, in Dayton, Ohio, she is the daughter of Rose (Nee: Reichenberger) and Ralph DeMange.... View Obituary & Service Information

The family of Sr. Donna DeMange created this Life Tributes page to make it easy to share your memories.

Send flowers to the DeMange family.