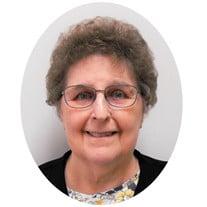 Sr. Elna Stemann, age 84 of the Sisters of St. Francis in Oldenburg, died Thursday, April 28, 2022 at the convent. Born September 15, 1937 in Cincinnati, Ohio, she was the second of four children born to Mary (Nee: Engman) and Louis Stemann. Elna and her family were members of St. Clement Church in Cincinnati, where she was educated by the Oldenburg Franciscans at the parish school. She often shared memories of staying after school to help the Sisters and soon knew that she had a religious calling. Elna had many fond memories of growing up in St. Bernard…watching her dad play ball in the park, enjoying the Fourth of July parades and being free to enjoy time with her siblings and friends until the Proctor and Gamble whistle blew for quitting time at 4:30, when the children knew it was time to return home for dinner. Her family also attended the many devotions and processions that the Franciscan priests officiated at St. Clement which fostered her life of faith. While in Jr. High, it was arranged for the school’s seventh and eighth grade girls to visit Oldenburg to experience a day as a Franciscan. By the time Elna enrolled in Our Lady of Angels High School, she and Sr. Amy Kistner and Sr. Lucy Driscoll shared their dream of attending the Academy of the Immaculate Conception. All three enrolled at Oldenburg as they began their sophomore year. In 1955, the three entered the Novitiate program and began their lives as postulants and ultimately taking final vows on August 12, 1960. Elna earned her BA degree in education at Marian University, MA in education at the University of Detroit and earned continuing education certifications at Purdue University, University of Cincinnati, Xavier University and the University of Notre Dame. From 1956-1991, she taught at schools in Indiana including Brookville, Rushville, Indianapolis, Bedford, New Albany, and Oldenburg. In addition, she was a core member of the House of Resurrection - House of Prayer in Cincinnati for four years. After a sabbatical, she returned to Oldenburg to serve as the convents’ Sacristan, Assistant Communications Director, Grounds Supervisor and later served as a volunteer at St. Mary’s Medical Center in Evansville, Indiana before retiring in 2018. In reflecting on her life, Elna once commented, “There was a day when I was on playground duty and something overwhelmed me. I looked up at the bluest sky and felt the gentle warmth of the sun and was unaware of anything else around me. I felt I could not leave this beautiful Earth for any reason but to see the face of God.” On April 28th, Elna’s faith was rewarded as she entered the Kingdom of God. She is survived by her sister Carla Ott of Norwood, Ohio, brother and sister-in-law Robert and Karen Stemann of Fairfield, Ohio along with numerous nieces and nephews. In addition to her parents, she is also preceded in death by her brother Louis Stemann. Visitation will be Tuesday, May 3rd from 1:30 – 3:00 p.m. at the convent. Funeral services follow at 3:00 p.m. with Fr. Carl Langenderfer, OFM officiating. Burial will be in the convent cemetery. For those unable to attend, services will be live-streamed at https://youtu.be/dGhNz3yeh2k. Memorials may be made to the Sisters of St. Francis, P.O. Box 100, Oldenburg, Indiana, 47036 (www.OldenburgFranciscans.org).

Sr. Elna Stemann, age 84 of the Sisters of St. Francis in Oldenburg, died Thursday, April 28, 2022 at the convent. Born September 15, 1937 in Cincinnati, Ohio, she was the second of four children born to Mary (Nee: Engman) and Louis Stemann.... View Obituary & Service Information

The family of Sr. Elna Stemann OSF created this Life Tributes page to make it easy to share your memories.

Sr. Elna Stemann, age 84 of the Sisters of St. Francis in Oldenburg,...