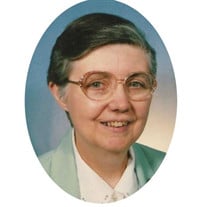 Sr. Francis Assisi Kennedy, age 82 of the Sisters of St. Francis in Oldenburg, Indiana died Tuesday, February 4, 2020 at the convent. Born Anna Marie on January 13, 1938 in Indianapolis, Indiana, she is the daughter of Helen Marie (nee: Walsh) and Paul Kennedy. Anna Marie grew up with her brother, Paul, in Indianapolis, where she attended Little Flower School until moving to the Beech Grove area and attending Holy Name. She entered the convent as a senior at the Immaculate Conception Academy in 1956, and made final vows in 1961. Sr. Francis Assisi earned a B.A. in English from Marian University, an M.A. in English from John Carroll University in Cleveland, and she later earned a second M.A. in Literature from the Bread Loaf School of English at Middlebury College in Vermont. She dedicated her life to serving God, especially through teaching. Sr. Francis Assisi taught elementary through college aged students in schools throughout Indiana and Ohio teaching predominantly English, Journalism, Latin and Religion. She was also a member of the Marian College English Department for five years, assisted her Community with journalism and public relations work as well as writing for religious and educational journals. In 2002 she was recognized with the Blessed Mother Theodore Guérin Excellence in Education Award presented by the Indianapolis Archdiocese. In 2009 she authored the jubilee history of the Archdiocese of Indianapolis, entitled, “A Mustard Seed Growing,” in commemoration of its 175th anniversary. During much of her retirement she served as the convent Archivist. Throughout her life Sr. Francis Assisi enjoyed penning poetry and often wrote about the beauty of nature, especially in winter. She left her earthly life in mid-winter and we remember her through one of her treasured works. Touches of Grandeur Bright red berries On a clear winter’s day Clear crystal-tipped And shining orange Against a golden clay. Touches of God’s royalty As we prepare His way. Visitation will be Friday, February 7th from 1:00 - 3:00 p.m. at the convent, followed by funeral services at 3:00 p.m. with Rev. Robert Weakley, OFM officiating. Due to chapel renovations, services will be held in the convent’s community room on second floor. Burial will be in the convent cemetery. Memorials may be made to the Sisters of St. Francis, P.O. Box 100, Oldenburg, Indiana, 47036 (www.OldenburgFranciscans.org).

The family of Sr. Francis Assisi Kennedy O.S.F. created this Life Tributes page to make it easy to share your memories.