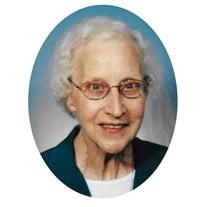 Sr. Gloria Gallagher, age 94 of the Srs. of St. Francis in Oldenburg, died Monday, January 7, 2019 at the convent. Born November 12, 1924 in Cincinnati, Ohio, she is the daughter of Elizabeth (Nee: Phillips) and Edward Gallagher. Sr. Gloria attended St. Clare School and Our Lady of Angels High School in Cincinnati where she met the Franciscan Sisters and began to pursue her music career. She accepted a scholarship to Marian University in Indianapolis, pursuing a degree in chemistry with a minor in music. By the end of her sophomore year, she reversed her major and music soon became her life. She earned an A.B. in music and chemistry from Marian, a B.M. from the College of Music in Cincinnati and an M.M. from the Conservatory of Music at the University of Cincinnati. Her career spanned 63 years teaching at Our Lady of Angels Academy and Fenwick High School in Ohio, Oldenburg Academy and Marian University in Indiana as well as serving as the organist and liturgist at the convent for 20 years. In 2000 she celebrated her golden jubilee. Much to her surprise, over 160 former Oldenburg Academy students secretly met for over year to plan and present a “Mr. Holland’s Opus” type of concert in her honor. As she entered the auditorium, she froze in amazement as she discovered it was filled with former students, family and friends gathered in her honor. A two hour concert followed, featuring many of her favorite instrumental and choral selections. It culminated with Sr. Gloria being invited to conduct the finale, Handel’s Hallelujah Chorus. Earlier in Sr. Gloria’s career she wrote “The Blessing of St. Clare” which continues to be sung by the Sisters when extending their blessing to others in song. When Congregational Minister Sr. Christa announced Sr. Gloria’s death, she noted, “As Sr. Gloria sang many times the “Blessing of St. Clare”, may God pour forth all graces on her abundantly and in heaven may God place her among the saints.” Visitation is Thursday, January 10th, from 1 -3 p.m. at the convent chapel. Funeral services follow at 3 p.m. with Rev. Bob Weakley O.F.M., officiating and burial will follow in the convent cemetery. Memorials may be made to the Srs. of St. Francis, P.O. Box 100, Oldenburg, Indiana, 47036 (www.OldenburgFranciscans.org).

Sr. Gloria Gallagher, age 94 of the Srs. of St. Francis in Oldenburg, died Monday, January 7, 2019 at the convent. Born November 12, 1924 in Cincinnati, Ohio, she is the daughter of Elizabeth (Nee: Phillips) and Edward Gallagher. Sr. Gloria... View Obituary & Service Information

The family of Sr. Gloria Gallagher O.S.F. created this Life Tributes page to make it easy to share your memories.