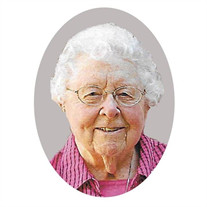 Sr. Irvin Marie Kreimer, age 97 of the Srs. of St. Francis in Oldenburg, died Saturday, September 8, 2018 at the convent. Born July 15, 1921 in Cincinnati, Ohio, she is the daughter of Agatha (Nee: Robbe) and John Kreimer, the eighth of eleven children She and her siblings attended St. Leo Catholic School where she met the Sisters of St. Francis. Her father owned a grocery store where she and her siblings would help out as they could along with helping their mother with the tasks of caring for a large family. Florence would often share how much the Sisters influenced her decision to enter religious life, and how the Sisters caught on to her early antics in the classroom which resulted in a few “after school assignments.” A graduate of Oldenburg Academy, she earned her BS in Education at Marian University and made her final vows in 1944. She completed her Master’s degree through classes at the University of Dayton and Murray State University, and earned her Principal’s License from Ball State University. Although she always wanted to be a nurse, she knew the Oldenburg Franciscan Order was a teaching community – and she eagerly began her 42 year teaching career in 1940. She was a brilliant educator and especially loved teaching in the primary grades and later science and math classes to seventh and eighth grade students. Her teaching career included schools in Indiana, Illinois, Ohio and Missouri, and four years as Principal at St. Lawrence in Indianapolis. Sr. Irvin Marie returned to Oldenburg in 1983 to serve as an Employee Manager for the Community, and later as the Motherhouse Minister. She served an additional 13 years as a Motherhouse Driver, chauffeuring Sisters to medical appointments which enabled her to help care for the elderly Sisters. At age 84, S. Irvin Marie officially “retired” – yet remained active in Community life, the Adopt-A-Sis Program, and enjoyed walking 10,000 steps daily, crocheting and completing jigsaw puzzles as her health permitted. Her sense of humor and willingness to cheer up those around her will be missed by all. Following a retreat in 2010, the creative Sister illustrated her experience by drawing a votive candle with the phrase, “Hollow out, fill up with God. Be a light to others.” On September 8th, the 80th Anniversary of her entrance to religious life, S. Irvin Marie returned to her creator – where she will continue to “fill up with God and be a light to others.” She is survived by nieces and nephews. In addition to her parents, she is also preceded in death by sisters Helen Fuller, Norma Heitz, Margaret Keilholz, Esther Philhower and brothers Milton, Richard, John, LeRoy, Edward and Irvin Kreimer. Visitation is Tuesday, September 11th from 1 – 3 p.m. at the convent. Funeral services follow at 3 p.m. with Rev. Robert Weakley O.F.M. officiating and burial in the convent cemetery. Memorials may be made to the Srs. of St. Francis, P.O. Box 100, Oldenburg, IN, 47036 (www.OldenburgFranciscans.org).

Sr. Irvin Marie Kreimer, age 97 of the Srs. of St. Francis in Oldenburg, died Saturday, September 8, 2018 at the convent. Born July 15, 1921 in Cincinnati, Ohio, she is the daughter of Agatha (Nee: Robbe) and John Kreimer, the eighth of eleven... View Obituary & Service Information

The family of Sr. Irvin Marie Kreimer O.S.F. created this Life Tributes page to make it easy to share your memories.