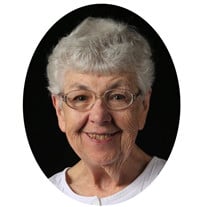 Sr. Joan Laughlin, age 85 of the Sisters of St. Francis in Oldenburg, Indiana, died on May 2, 2021 at the convent. Born Joan Marie on December 7, 1936 in Buffalo, NY, she was the first of two children born to Frank and Mary Clare Laughlin. She is survived by her brother and sister-in-law Jim and Kathleen Laughlin of Cincinnati, Ohio. A native of Buffalo, Joan’s family moved to Cincinnati when she was three due to her father’s employment. She attended St. Clare School in College Hill followed by Our Lady of Angels High School, and it was there that Joan became interested in pursuing her religious vocation. She noted in her autobiography, “In the summer of my sophomore year, I attended the Catholic Students Mission Crusade convention at the University of Notre Dame that furthered my desire to serve as a missionary. While I considered several communities, it became clear that Oldenburg was where I was being called. I entered the postulant program at Oldenburg on September 8, 1954 and was happy to be a part of a group of thirty-three talented and energetic young women. We had many good times together learning the intricacies and the eccentricities of religious life.” Joan earned a degree in education at Marian College in Indianapolis, and later earned her master’s degree at Ball State University in Muncie. She spent 24 years as an educator in elementary schools in Indiana and Ohio before moving on in 1980 to become the Director of the Associate Program at her home parish, St. Clare in College Hill. In subsequent years she would minister as both and educator and Director of Associates until she returned to Oldenburg in 1986 to serve on the General Council for eight years. Following a brief sabbatical, Joan was off to minister in formation with her Franciscan Sisters in Papua New Guinea as the group founded the Franciscan Sisters of Mary community to continue the missionary work in Papua New Guinea when the Oldenburg Franciscans returned to the U.S. In 2001 Joan served as Co-Director of the Oldenburg Franciscans’ Associates, where she worked with Judy Hillman to grow the program to the success it enjoys today with over 200 Associate members following the teachings of St. Francis and walking alongside the Sisters. In Joan’s words, “It was a privilege to ‘walk with’ women and men who had discerned or were discerning their call to be associated with the life and mission of our Community.” She retired from this ministry in 2011 and continued to serve in various capacities including as member of the Ecology Committee, coordinating the Very Important Sister “VIS” program, volunteering in the Office of Justice, Peace and the Integrity of Creation, and as an active member of the Adopt-a-Sis program bringing Oldenburg Academy students together with the Sisters. Joan began her final ministry of prayer and praise in 2017. In her autobiography that she updated in 2019, Joan summarized her life be saying, “As I look back at my years as an Oldenburg Franciscan Sister, I say ‘It has been good for me to be here.’ There have been fruitful times, and seemingly fruitless times. There has been laughter and tears. There have been friendships gained and friends lost. There has been growth, and there is more growth to come. Even at my age, I believe that in some ways I have only just begun to answer God’s call. With gratitude and love, I will continue to try to fan the flame of the Spirit in whichever way I am able.” Visitation is Thursday, May 6th from 1 – 3 p.m. at the convent. Funeral services follow at 3 p.m. with Rev. Jim Meade officiating. Attendees must be fully vaccinated and masks are required. The service will be livestreamed and can be seen at 3 p.m. by going to https://youtu.be/1mAmvb6T8pE. Memorials may be made to the Srs. of St. Francis, P.O. Box 100, Oldenburg, Indiana, 47036 (www.OldenburgFranciscans.org).

Sr. Joan Laughlin, age 85 of the Sisters of St. Francis in Oldenburg, Indiana, died on May 2, 2021 at the convent. Born Joan Marie on December 7, 1936 in Buffalo, NY, she was the first of two children born to Frank and Mary Clare Laughlin.... View Obituary & Service Information

The family of Sr. Joan Laughlin OSF created this Life Tributes page to make it easy to share your memories.

Sr. Joan Laughlin, age 85 of the Sisters of St. Francis in Oldenburg,...