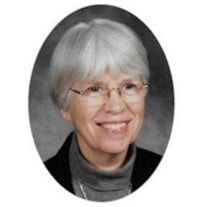 Sr. Joan Luerman, age 86 of the Sisters of St. Francis in Oldenburg, died on November 4, 2021 at the convent. Born Margaret Ellen Luerman on August 17, 1935 in Richmond, Indiana, to Hilda (Nee: Maurer) and Anthony Luerman, she grew up with four sisters attending St. Andrew School where her father was the parish choir director. Sr. Joan noted how the Luerman family attended all services and appreciated getting to know the clergy and educators. She graduated from Richmond High School in 1953. She came to know the Oldenburg Franciscans during her grade school education and spoke highly of her eighth grade teacher and principal, Sr. Georgine Bocklage, who began a sodality for the young women of the parish. Participation in the sodality combined with her admiration for her aunt, Sr. Frances Romaine Maurer, greatly influenced Joan’s call to religious life. She also expressed her appreciation for Sr. Estelle Nordmeyer’s care and guidance through her novitiate years. Sr. Joan went on to earn a bachelor’s degree in education from Marian University, a master’s degree in reading clinician from Clarke College and a master’s degree in pastoral ministry from Seattle University. She estimated that she’s taught approximately a thousand students as her ministries took her to Ohio, Indiana, Missouri and Michigan. She had an enduring love for the youngest students and taught the early grades. One of her happiest mission experiences was being one of the four Sisters who opened the school at New Buffalo, Michigan. Later she returned there to serve as the school’s principal. In 1981, Sr. Joan wanted to return to teaching and taught at St. Vincent de Paul School in Bedford, Indiana, where she also served as pastoral associate for the parish, serving for 29 years before returning to Oldenburg in 2010. In 2003, Sr. Joan received the Indianapolis Archdiocese’s Catholic School Values Career Achievement Award in recognition of her lifetime devotion to Catholic education and in 2009 she was awarded the Medal for Excellence in Religion in the community of Indiana’s Lawrence County. This award recognizes women for their exemplary life and example to others. In addition to her work in education, while serving as a pastoral minister in Bedford, she served as a counselor to women and a much-needed compassionate assistant to the terminally ill and dying. She worked alongside local ministers and ministerial associations and she affirmed the transformation of an old home into a shelter for women and children while encouraging groups to “adopt a room” to enable the project to be completed. She sang in the choir, served as lector and Eucharistic minister, lead prayer services at nursing facilities, visited those in hospitals and those who were homebound. She was a compassionate presence in Bedford for almost three decades. Sr. Joan retired in 2010 and returned to Oldenburg. When interviewed about her religious vocation she commented, “When I entered our Community I found the peace for which I was searching. I praise the Lord for this gift to me and for giving me a much larger family with which to share my love. God is good!” She is survived by her sisters Frances Romaine (Paul) DeLucio of Richmond, Indiana; Jean Antonia (Russell) Krebs of Campbellsport, Wisconsin, Mary Anita Coblentz of Bradenton, Florida and numerous nieces and nephews. In addition to her parents she is also preceded in death by her sister Joan Marie Luerman. Visitation will be Wednesday, November 10th from 1 – 3 p.m. at the convent chapel. Funeral services follow at 3 p.m. with Rev. Bob Ross officiating and burial in the convent cemetery. Guests who have been vaccinated are welcome to attend but masks are mandatory. For those unable to attend, services will be live-streamed at https://youtu.be/AeqRHatIsUE. Memorials may be made to the Sisters of St. Francis, P.O. Box 100, Oldenburg, Indiana, 47036 (www.OldenburgFranciscans.org).

Sr. Joan Luerman, age 86 of the Sisters of St. Francis in Oldenburg, died on November 4, 2021 at the convent. Born Margaret Ellen Luerman on August 17, 1935 in Richmond, Indiana, to Hilda (Nee: Maurer) and Anthony Luerman, she grew up with... View Obituary & Service Information

The family of Sr. Joan Luerman OSF created this Life Tributes page to make it easy to share your memories.

Sr. Joan Luerman, age 86 of the Sisters of St. Francis in Oldenburg,...