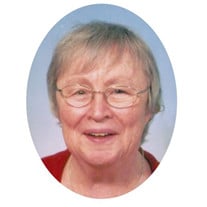 Sr. Marietta Sharkey, age 84 of the Srs. of St. Francis in Oldenburg, died Wednesday, September 19, 2018 at the convent. Born August 18, 1934 in Indianapolis, she is the daughter of Mary (Nee: Duffy) and William Sharkey, the youngest of three children. She and her brothers were proud of their Irish heritage, but like many families during the depression, struggled to make ends meet. Both Sr. Marietta’s parents suffered from heart disease, and died while the children were young, leaving them to be raised by a foster family. They attended Little Flower School in Indianapolis, and Sr. Marietta went on to graduate from St. Mary Academy and appreciated all the guidance from the Franciscan Sisters throughout these years.. After graduation, Sr. Marietta entered the Sisters of St. Francis community in Oldenburg, and began her college education. After earning her degree from Marian University, she began teaching at elementary schools in Indiana and Ohio, and soon began her Master’s Degree studies in Education and Theology at Xavier University in Cincinnati. After earning her Master’s Degree, she began ministering as a Director of Religious Education at various parishes. In 2004 she facilitated a four-week visit for six Palestinian children and their teacher at Assumption Parish in Cincinnati. The parish was awakened to the suffering and hardship of the Palestinian people, so the parish began to sponsor children in Palestine. Suhair, the teacher of the children who to traveled to America, remained in contact with Sr. Marietta through the years as the two became like sisters. In reflecting on her life, Sr. Marietta commented, “Our days, our years, were filled with happy memories and deep down it was clear why we were there: our education and a foundation in the Catholic faith. As I continued on in my education through high school, college and graduate studies, I always felt grateful for the foundation I received at Little Flower School. I know I could not have accomplished all I have been involved in without it.” Sr. Marietta is survived by her step sister Mary Lou Withem and step brothers Charles, Tom and Joe Withem. In addition to her parents, she is also preceded in death by her brothers John and Bill Sharkey. Visitation is Tuesday, September 25th, from 1 – 3 p.m. at the convent chapel. Funeral services follow at 3 p.m. with Rev. Rob Waller officiating and burial will be in the convent cemetery. Memorials may be made to the Srs. of St. Francis, P.O. Box 100, Oldenburg, Indiana, 47036 (www.OldenburgFranciscans.org).

Sr. Marietta Sharkey, age 84 of the Srs. of St. Francis in Oldenburg, died Wednesday, September 19, 2018 at the convent. Born August 18, 1934 in Indianapolis, she is the daughter of Mary (Nee: Duffy) and William Sharkey, the youngest of three... View Obituary & Service Information

The family of Sr. Marietta Sharkey O.S.F. created this Life Tributes page to make it easy to share your memories.