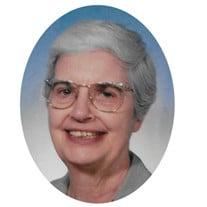 Sr. Marilynn Hofer, formerly Sr. Maryl, age 88 of the Srs. of St. Francis in Oldenburg, died unexpectedly on March 26, 2022 at the convent. Born on June 12, 1933 in Chicago, Illinois, she is the second of seven children born to Louise (Nee: Belda) and John Hofer. After moving to Indianapolis, she enrolled in elementary school at Our Lady of Lourdes where the family were parishioners. For third grade she attended St. Joseph Academy in Tipton for one year as a boarding student before returning to Our Lady of Lourdes. She then attended high school at St. Mary’s Academy in Indianapolis, following the family’s love of the Franciscans. Her father spent five years in the Franciscan seminary of the St. Louis province and her great-grandmother was a Third Order Franciscan who introduced Marilynn’s mother to them. Having met the Franciscan Sisters at an early age, she soon expressed an interest in joining the community. She entered in 1951 and enrolled at Marian University where she earned her Bachelor of Arts degree in education. She later would receive her Master’s degree in education from Xavier University and her Ph.D. in secondary education from the University of Notre Dame. Upon entering the convent, she began teaching in elementary schools, including St. Michael’s in Brookville, Indiana; Our Lady of Victory in Cincinnati, Ohio; Holy Name in Beech Grove, Indiana and Rex Mundy High School in Evansville, Indiana, before enrolling as a graduate student at the University of Notre Dame. For the next 26 years she served as an Education Department Professor at Marian University. Following a year of sabbatical, Marilynn returned to Marian as the Assistant Director of Alumni for 14 years before coming home to Oldenburg in 2011, serving as the Sisters’ health insurance coordinator until the time of her death. Marilynn was honored with Marian’s Franciscan Staff Award in recognition of her years of dedication to students at the university. After returning to Oldenburg, she commented, “Living and working at the Motherhouse has been a joy for me. The opportunities for prayer, sharing, attending programs in a pleasant atmosphere are most satisfying. My responsibilities allow time for my interest in walking, reading, studying and visiting the Sisters. I still remain connected with Marian University as a Sister Representative to the Board of Trustees … and am blessed to have the best of both worlds.” She is survived by her sister and brother-in-law Andrea and Charlie Carter of Costa Rica; sister-in-law Mary Ann Borgo of Williamsburg, Virginia, along with numerous nieces and nephews. In addition to her parents, she is also preceded death by her sister Louise Pierce and brothers Ronald, John, Michael and Francis Hofer. Visitation is Friday, April 1st, from 1:30 – 3:00 p.m. at the convent chapel. Funeral services follow at 3:00 p.m. with Fr. Jim Farrell, STB officiating, with burial in the convent cemetery. Guests who have been vaccinated are welcome to attend but masks are mandatory. For those unable to attend, services will be live-streamed at https://youtu.be/hNsyX5RNiPc. Memorials may be made to the Srs. of St. Francis, P.O. Box 100, Oldenburg, IN, 47006 (www.OldenburgFranciscans.org).

Sr. Marilynn Hofer, formerly Sr. Maryl, age 88 of the Srs. of St. Francis in Oldenburg, died unexpectedly on March 26, 2022 at the convent. Born on June 12, 1933 in Chicago, Illinois, she is the second of seven children born to Louise (Nee:... View Obituary & Service Information

The family of Sr. Marilynn Hofer OSF created this Life Tributes page to make it easy to share your memories.