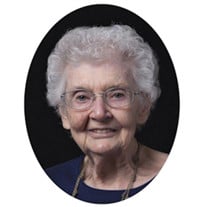 Sr. Marta Aiken, age 95 of the Sisters of St. Francis in Oldenburg, Indiana died on March 29, 2021 at the convent. Born Doris Anne Bakewell Aiken on May 6, 1925 in Cincinnati, OH, she is the only child of Victor and Norma (Quitter) Aiken. Sr. Marta attended Nativity School, followed by Pleasant Ridge School before the family moved to Richmond, Indiana and she continued her education at Hibbard Jr. High School, Richmond Sr. High School and ultimately Marian College. Marta first met the Franciscan Sisters when she attended St. Andrew Church in Richmond. Having enrolled in college during World War II, Marta joined the work force while pursuing her college degree and was employed at F.W. Woolworth, JCPenney’s and at a factory manufacturing machine gun shell casings. She earned a Bachelor’s degree in History at Marian University in Indianapolis, Indiana and met many members of the Sisters of St. Francis as she discerned her call to religious life. Marta’s parents were not enamored with her decision to pursue a religious calling. Her father was non-Catholic and ultimately disowned her while her Catholic mother refused to support her decision. Marta noted that while she felt at home with her Sisters in Oldenburg, it would take several years of prayer and support before she would see her parents slowly accept her decision. During this time Sr. Lavonne Long became her confidant as she had experienced a similar situation within her family. When asked what attracted her to the Oldenburg Franciscans, Marta noted in an earlier interview, “I think the strongest attraction was the down-to-earth attitude that these Sisters shared with us at Marian. I saw the love of God, a charitable group of women who gave much to us as students, both in the classroom and in the dorm, women who lived the WORD in everyday life. After my first trip to Oldenburg, I knew in my heart that I too, wished to share my life and gifts with this group of women. I have never regretted a moment of it.” Through the years Marta continued her education earning a Master’s degree in Education with a concentration in Spanish from Xavier University in Cincinnati, Ohio and completed studies at the University of Madrid, Spain, Middlebury College in Vermont and St. Louis University in Missouri. Marta served as an educator at St. Leo and Our Lady of Angels in Cincinnati, St. Ann in Hamilton, Ohio; Holy Cross in St. Louis, Missouri; Immaculate Conception Academy in Oldenburg; St. Mary Academy and Marian University in Indianapolis, where she served as an Associate Professor of Spanish for 12 years. After 30 years of teaching, she opted for a sabbatical and spent two years at Shalom House for personal growth where she embraced a new ministry in the Hospice of Methodist Hospital in Indianapolis while continuing to serve as librarian at Chatard High School. After discernment, Marta opted to pursue the Corporate Ministry Program at St. Louis University which included clinical Pastoral Education and marked new beginnings. After a residency at Jacksonville Baptist Medical Center in Florida, she was ready for full-time chaplaincy at St. Francis Hospital in Monroe, Louisiana, followed by 10 years at St. Joseph Medical Center in Tampa, Florida. In 1996, Sr. Marta returned to Oldenburg to accept the Directorship of Pastoral Care of St. Clare Hall where she ministered for four years before seeking a part-time ministry as Chaplain of the Motherhouse Sisters to accompany them to medical appointments. Marta’s life has always reflected Franciscan charisms and was founded in prayer and service as she ministered as an educator, gentle listener, loving presence and a woman of quiet dignity, integrity and ever open to the Spirit. A private visitation and service will be held. The funeral mass will be live-streamed at 3 p.m. Tuesday, April 6th, with Rev. Robert Weakley O.F.M. officiating. It can viewed by going to https://youtu.be/cv35SbiLN4A. Memorials may be made to the Srs. of St. Francis, P.O. Box 100, Oldenburg, Indiana, 47036 (www.OldenburgFranciscans.org).

Sr. Marta Aiken, age 95 of the Sisters of St. Francis in Oldenburg, Indiana died on March 29, 2021 at the convent. Born Doris Anne Bakewell Aiken on May 6, 1925 in Cincinnati, OH, she is the only child of Victor and Norma (Quitter) Aiken. Sr.... View Obituary & Service Information

The family of Sr. Marta Aiken O.S.F. created this Life Tributes page to make it easy to share your memories.

Sr. Marta Aiken, age 95 of the Sisters of St. Francis in Oldenburg,...