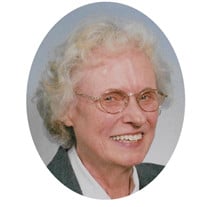 Sr. Mary Stella Gampfer, age 81 of the Srs. of St. Francis in Oldenburg, died Friday, April 12, 2019 at the convent. Born February 25, 1938 in Covington, Kentucky, she is the daughter of Rose (Nee: Goeke) and Charles Gampfer. The second of three children of Charles and Rose, the family moved across the river to Cincinnati when she was young. She attended St. Bernard School at Winton Place where she became acquainted with the Oldenburg Franciscans and began her interest in religious life. The family would move to the suburb of Norwood and where she met the Srs. of the Precious Blood order, but kept in contact with the Franciscans she met in grade school. The family’s parish was served by Franciscan Friars so her interest in the Franciscans continued to grow. Following graduation, she entered the convent, which was delayed by her mother being ill. Her mother died the following year. Her father would eventually remarry and two more sons were added to the Gampfer family. Sr. Mary Stella earned a Bachelor’s degree from Marian University and a Master’s degree in English from the University of Notre Dame. In her early years she taught at schools in Evansville and Oldenburg Indiana as well as Cincinnati and Middletown in Ohio. She also held the position of Directress of the Aspirancy at the Motherhouse for four years, along with instructing Novices and Postulants in English and history. In 1974, Sr. Mary Stella became an instructor of English at Marian University in Indianapolis and was made Assistant Professor of the English Department in 1979. She would hold that position until her retirement in 2015. Other duties included teaching writing and literature courses, overseeing the university’s Fioretti (a student led literary and visual arts journal released yearly) as well as coordinating the annual Student Recognition Dinner and Awards Program. Sr. Mary Stella is survived by brothers David, Joseph and Terrance Gampfer, all of Ohio. In addition to her parents, she is also preceded in death by her brother Charles Gampfer. Visitation is Tuesday, April 16th, from 1 – 3 p.m. at the convent chapel. Funeral services follow at 3 p.m. with Rev. Leopold Keffler O.F.M. officiating and burial in the convent cemetery. Memorials may be made to the Srs. of St. Francis, P.O. Box 100, Oldenburg, Indiana, 47036 (www.OldenburgFranciscans.org).

Sr. Mary Stella Gampfer, age 81 of the Srs. of St. Francis in Oldenburg, died Friday, April 12, 2019 at the convent. Born February 25, 1938 in Covington, Kentucky, she is the daughter of Rose (Nee: Goeke) and Charles Gampfer. The second of... View Obituary & Service Information

The family of Sr. Mary Stella Gampfer O.S.F. created this Life Tributes page to make it easy to share your memories.