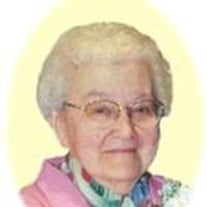 Sr. Catherine Mary Veda O.S.F., age 92 of the Srs. of St. Francis in Oldenburg, Indiana, died Sunday, August 18, 2013 at the convent. Born December 29, 1920 in Middletown, Ohio, she is the daughter of Mary (Nee: Pochepan) and Peter Veda.She entered the convent September 8, 1944 and made her final vows August 12, 1950. Sr. Catherine was an elementary teacher for 30 years teaching at St. Peter’s in Chains in Hamilton, Ohio, St. John’s in Middletown, Ohio, Holy Family School in Oldenburg, Indiana, St. Christopher’s in Indianapolis, Indiana and St. Aloysius in Covington Kentucky. Having the Sister’s from Oldenburg as teachers during her youth inspired her to join the convent and become a teacher herself. Well respected, she had many students who she stayed in touch with. After teaching, Sr. Catherine semi-retired to the motherhouse as a sacristan. When her mother’s health began to fail she returned to Middletown to care for her over the next ten years before finally retiring to the motherhouse.She is survived by brothers Edward of Scottsdale, Arizona, Joseph of Dayton, Ohio and several nieces and nephews. In addition to her parents, she is also preceded in death by her sister Catherine and five siblings who died in infancy. Visitation is Thursday, August 22nd, from 1-3 p.m. at the motherhouse chapel. Funeral services follow at 3 p.m. with Rev. Pat McCloskey O.F.M. officiating with burial in the convent cemetery. Memorials may be made to the Srs. of St. Francis, P.O. Box 100, Oldenburg, Indiana, 47036 (www.OldenburgFranciscans.org).

The family of Sr. Catherine Mary Veda O.S.F. created this Life Tributes page to make it easy to share your memories.