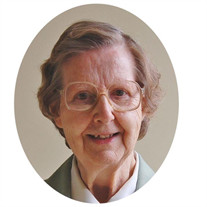 Sr. Myra Peine, age 91 of the Sisters of St. Francis in Oldenburg, Indiana, died on September 24, 2021 at the convent. Born on August 13, 1930, in Brookville, Indiana, to Anna (Nee: Meyer) and Albert Peine, she grew up with three other siblings. Myra once shared how her interest in justice and peace issues began as a child when she observed her parents’ concern for underprivileged people. She felt it was quite natural to follow their example and found the Franciscan Sisters shared her many of her parents’ values. She had two aunts in the community, Sr. Mary Jane Peine and Sr. Mary Albert Peine, who also influenced her religious calling. After entering the community in 1951, Sr. Myra taught at St. Rita School on the north side of Indianapolis for eight years beginning in 1954. Fr. Bernard Strange served as Pastor and was a model of perseverance for his people in the African American parish, a trait that she admired and often spoke about through the years. While at St. Rita School, Sr. Myra earned her Bachelor of Arts degree in Education with a concentration as a reading specialist at Marian University. In 1963, Sr. Myra would put her degree to the test as she served as a teacher and later principal at St. Joseph School in Kansas City, Missouri. The inner-city school struggled to raise scholastic standards and poor reading skills were an important factor for the lack of progress. After several years at St. Joseph, Sr. Myra noted, “Due to dedicated staff and cooperative parents, our children were soon accepted in choice high schools, colleges and universities. We were known as the “flagship” of the inner-city schools and were visited by teachers wanting to know how we accomplished this.” In addition to improving the school’s scholastic standards, she helped to implement multi-cultural studies that ultimately resulting in a student exchange program that opened the minds of students and parents alike. Her 21 years there greatly impacted the lives of students and their families. In 1983 Sr. Myra returned to the convent to assist in the occupational therapy department and in 1984, she accepted a position as the Sisters’ Activities Coordinator, which she continued to do until 2009. During her time as activities coordinator, she introduced many crafts and activities, including guest speakers who came to share information on various topics of the day. Given her life-long interest in peace and justice issues, Sr. Myra worked to keep the Sisters informed of controversial topics by securing speakers with different viewpoints. In an interview Myra revealed, “With the help of Sr. Rachel West, we Sisters at the Motherhouse were very active in letter writing campaigns encouraging our legislators and others to pursue matters that promote justice. Legislators knowing that the Sisters are well informed enjoyed coming here to visit, to speak and to listen to our concerns.” She retired in 2009 due to declining health and the onset of dementia. Sr. Barbara Riemensperger assisted Myra while activities coordinator and remained by her side throughout her mental decline, always encouraging her and seeking activities to stimulate her memory while providing comfort at the end of her life. In an interview when Sr. Myra was celebrating her 50th jubilee, she summarized her Franciscan life by commenting, “All praise and thanks to You, my Lord, for calling me to be an Oldenburg Franciscan!” She is survived by nieces and nephews. In addition to her parents, she is also preceded in death by sister Susan Tise and brothers Thomas and Albert Peine. Visitation is Thursday, September 30th from 1 – 3 p.m. at the convent. Funeral services follow at 3 p.m. with Rev. Al Hirt, OFM officiating. Burial will be in the convent cemetery. Guests who have been vaccinated are welcome to attend but masks are mandatory. For those unable to attend, services will be live-streamed at https://youtu.be/ANrl26GL2RM. Memorials may be made to the Sisters of St. Francis, P.O. Box 100, Oldenburg, Indiana, 47036 (www.OldenburgFranciscans.org).

Sr. Myra Peine, age 91 of the Sisters of St. Francis in Oldenburg, Indiana, died on September 24, 2021 at the convent. Born on August 13, 1930, in Brookville, Indiana, to Anna (Nee: Meyer) and Albert Peine, she grew up with three other siblings.... View Obituary & Service Information

The family of Sr. Myra Peine OSF created this Life Tributes page to make it easy to share your memories.

Send flowers to the Peine family.