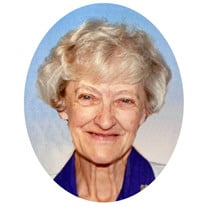 Sr. Norma Rocklage, age 86 of the Sisters of St. Francis in Oldenburg, Indiana, died Monday, June 22, 2020 in Indianapolis. Born Mary Ann Rocklage on July 18, 1933 in St. Louis, Missouri, she is the second oldest of eight children born to Catherine (nee: Lohmann) and Henry Rocklage. Sr. Norma grew up with her close-knit family in St. Louis, attending Holy Cross School where she first became acquainted with the Franciscan Sisters, and by the eighth grade, she began thinking about becoming a Sister. She attended high school at the Immaculate Conception Academy in Oldenburg, and although quite shy and homesick, she soon made friends and enjoyed her participation in student council and school publications. It was in witnessing the Sisters’ joy in their dedicated service that drew Mary Ann to the Community, and she professed her final vows on August 12, 1957. Sr. Norma continued her education at Marian College, earning a B.A. and at St. Louis University earning an M.A. and her Ph.D. She began teaching primary grades at St. Mary School in North Vernon, Indiana in 1953, followed by middle school students at St. Francis of Assisi School in Portage des Sioux, Missouri before dedicating much of her life to students at Marian College, now Marian University, beginning in 1965. Her positions at Marian include: • 1965-1974 Assistant Professor, Classical Languages • 1970-1974 Dean for Academic Affairs • 1974-1982 Member of the Marian College Board of Trustees • 1989-2004 Director/Vice President for Mission Effectiveness • 2005-2019 Executive Director for Formation & Outreach In 1989, she was approached by five diocesan superintendents of Indiana to initiate a program for beginning principals on developing lay spirituality since almost all principals were lay men and women and not of religious vocation. With a grant from the Lilly Endowment, Sr. Norma helped to develop an 18-month program for beginning principals, and eventually for veteran principals and parish teams, and directed it from 1989-2019 as the Indiana Catholic Principals Institute. A partial listing of Sr. Norma’s awards include: • 1996 Marian College Distinguished Alumna Award • 2005 Brebeuf Preparatory School High School – Honorary Diploma • 2008 Marian College Athletic Hall of Fame • 2014 Archdiocesan Council for Educational Excellence • 2015 Marian College Intercultural Person of the Year • 2015 Archdiocesan Spirit of Service Award • 2016 Bertha Torres Hispanic Award • 2016 Marian College Franciscan Values Award • 2016 Indiana Council for Latino Affairs Distinguished Service Award • 2017 Center for Interfaith Cooperation’s Interfaith Ambassador of the Year • 2017 Franciscan Federation’s Intercultural Award • 2018 Oldenburg Academy’s Distinguished Alumna Award In reflecting upon her years at Marian, Sr. Norma commented, “I learned a great deal about global affairs, was afforded many opportunities for being involved in interfaith and intercultural affairs, was able to establish at Marian a Latino/Hispanic Advisory Board composed of Marian faculty and staff and Indianapolis community members to advocate for Hispanic students to receive a higher education degree and learn of their rights, though undocumented, and also established a Service Learning Board to foster efforts in combining service learning with the academic goals and not merely volunteer work. The faculty, staff and students challenged me so often by their energy, vision and willingness to have the COURAGE TO VENTURE, so much like our Mother Theresa Hackelmeier … without knowing they were doing so. I had loved teaching elementary school children who still have a special place in my heart and I actually cried when I realized I was being prepared for college teaching, for I thought I would NEVER like that ministry! How wrong I was! I am very grateful for the 40+ years of being involved with the Marian Community for I was graced with many blessings.” When asked to reflect upon her life, Sr. Norma shared, “As our Community becomes older, poorer, more vulnerable, fewer in number and perhaps less sure of the future, I find my love for and hope in the Community growing. As we move ahead into the uncertain future, I sense we are moving together more dependent on the Lord and more able to share our journey and lives with others. My favorite line in our mutual and personal ministry and mission is, ‘Where there is one, there is the Community, there is the church, there is Jesus.’” She is survived by her sisters Sr. Mary Roch RSM of St. Louis, Missouri, Dee Schantz of Gresham, Oregon; brothers Joseph Rocklage of St. Louis, Missouri and Aloysius Rocklage of Rosemount, Minnesota as well as many nieces, nephews and friends. In addition to her parents, she is also preceded in death by her sister Clara La Rose and brothers Nobert and Raymond Rocklage. Visitations will be held Friday, June 26th, from 2 – 8 p.m. at the Marian University Arena and Convocation Center (enter through the Peyton Manning Hall of Champions and bring your own mask) located at 3200 Cold Spring Road in Indianapolis. Visitation will also be held Monday, June 29th, from 1 – 2:30 p.m. at the Weigel Funeral Home in Batesville located at 151 W. George St. Graveside services will be held 9:30 a.m., Tuesday, June 30th at the convent cemetery in Oldenburg. A memorial mass will be held at a late date. Memorial contributions may be made to the Sisters of St. Francis, P.O. Box 100, Oldenburg, Indiana, 47036 (www.OldenburgFranciscans.org), or to the Sr Norma Rocklage Endowed Diversity Scholarship at Marian University.

The family of Sr. Norma Rocklage OSF created this Life Tributes page to make it easy to share your memories.

Sr. Norma Rocklage, age 86 of the Sisters of St. Francis in Oldenburg,...