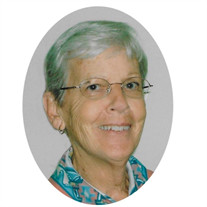 Sr. Patricia Zartman, age 92 of the Srs. of St. Francis in Oldenburg, died Sunday, December 19, 2021 at the convent. Born on June 19, 1929, in Cleveland, Ohio, she was the older of two daughters born to Mary “Adele” (Nee: Prenatt) and William Hankey Jr. Patricia’s early life was not easy as the family moved from Cleveland to live with Patricia’s grandparents in Meadville, Pennsylvania in 1934. Soon after, her younger sister was born. Her parents divorced in 1935 and her father died unexpectedly two years later. Her mother remarried in 1944 and Patricia attended St. Brigid School. Following high school, she enrolled in Fairfield Hospital School of Nursing in Lancaster, Ohio and would marry William Zartman following his discharge from the Navy. The couple made their home in Columbus, Ohio and their first son, William, was born in 1950. Three months later Patricia’s husband was recalled to active duty due to the Korean War. She and baby William followed him to Philadelphia, then later to Portsmouth, Virginia where they lived until his discharge in 1952. The following year son Joseph was born. The family moved to Front Royal, Virginia where daughter Patricia was born in 1954 and later moved to Cincinnati in 1956 where son Douglas was born. During this time Patricia began studies for a BS in education at the University of Cincinnati and taught at St. Ann’s School in Groesbeck where their children attended. In 1964, Patricia’s life changed when her grandmother died and eight weeks later her mother died unexpectedly. She struggled with the grief for many years, busy caring for her family while also teaching. She had once asked her mother, “Why do you get up each day?” and she responded, “I get up to receive Jesus in Communion.” In 1970 Patricia returned to graduate school at Miami University to earn her Master’s in education and began teaching. The children graduated, married and started their own lives. During this time, her husband, suffering from health issues, passed away unexpectedly in 1984, leaving Patricia coping with immense grief. Patricia noted in her autobiography, “I challenged God to fill up my life again. He did, for at that time I became acquainted with the Sisters of St. Francis at St. Bart’s where I taught and I often enjoyed meals and prayers. I experienced the joy of the Sisters in religious life and discerned whether I, too, had a call to live that life. I believed I did.” Patricia became a Postulant in 1986 and found life within the Community to be joyous, yet it was tempered with frustration as she missed her grandchildren and was having problems finding a life-giving ministry. She decided to leave the Community in 1990, became a Franciscan Associate and continued her friendships within the Community. In 1996, Patricia’s son Joseph died unexpectedly at age 43. She noted, “Through grief, his death brought me closer to Jesus and His suffering, and especially to Mary who is truly my Mother of Sorrows.” In the years following, Patricia felt the longing to return to the Franciscan Community and decided to follow her heart after Fr. Murray Bodo shared with her, “When your heart leads your head, you are on your way.” Patricia returned to the Community in 1999, and summarized her life by commenting, “God continues to be first in my life, and I praise and thank our creator daily. May my life bring peace and hope to others.” She is survived by her daughter Patricia Adele Zartman (Michael Clemons) of Cincinnati; sons William (Grace) Zartman of Fairborn, Ohio, Douglas (Karen) Zartman of Nokomis, Florida; daughter-in-law Marsha Zartman of Cincinnati and numerous grandchildren. Patricia is preceded in death by her parents Adele and William Hankey; stepfather William Showalter; son Joseph Zartman; sister Helen Hughes and daughter-in-law Vicky Lynn Zartman Visitation is Thursday, December 23rd from 9:00 – 10:30 a.m. at the convent chapel. Funeral services follow at 10:30 a.m. with Rev. Kenneth Overberg officiating. Burial will be at 2:30 p.m. at Arlington Memorial Gardens in Cincinnati. Guests who have been vaccinated are welcome to attend but masks are mandatory. For those unable to attend, services will be live-streamed at https://youtu.be/Uu6Zly3VOV8. Memorials may be made to the Sisters of St. Francis, P.O. Box 100, Oldenburg, Indiana, 47036 (www.OldenburgFranciscans.org).

The family of Sr. Patricia Zartman OSF created this Life Tributes page to make it easy to share your memories.