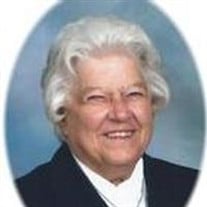 Sr. Mary Peter Sterwerf, age 83 of the Srs. of St. Francis, died Wednesday, December 11, 2013 at the convent. Born February 7, 1930 in Hamilton, Ohio, she is the daughter of Freda (Nee: Fallert) and Joseph Sterwerf. She entered the convent September 5, 1948 and made her final vows August 12, 1954. An advocate for and working with battered women and children was very important to her. She was an accomplished handcrafter, enjoyed spirited cards games and had a delightful sense of humor. A teacher for 36 years, she taught at St. Gabriel’s in Connersville, Indiana, St. Mary’s in Evansville, Indiana, St. Joseph’s in Shelbyville, Indiana, Holy Family in Richmond, Indiana, St. Lawrence in Indianapolis, Indiana, St. Mary’s in North Vernon, Indiana, St. Mary’s in New Albany, Indiana, Immaculate Conception in Old Monroe, Missouri, St. Bernard’s in Taylor’s Creek, Ohio, St. Mary’s in Middletown, Ohio, St. Peter’s in Hamilton, Ohio and St. Peter’s in Chillicothe, Ohio. Strict discipline managed with a gentle hand was her approach. In 1977 she became an Elementary Principal while working at North Vernon and in 1986 she became pastoral assistant for St. Peter’s Church in Chillicothe. She developed programs to spread God’s word to the elderly, the infirmed and those hospitalized. In 2011 she returned to the Motherhouse in Oldenburg.Sr. Mary Peter is survived by numerous nieces, nephews, great nieces and great nephews. In addition to her parents, she is also preceded in death by her sisters Ruth Hoelle, Janet Abbott and brothers Ralph, Russell, Harold and Rev. Walter Sterwerf. Visitation is Monday, December 16th, from 11 a.m. until 1 p.m. at the Motherhouse in Oldenburg. Funeral services follow at 1 p.m. Rev. William Hahn and Rev. James Black officiating with burial in the convent cemetery. Memorials may be made to the Srs. of St. Francis, P.O. Box 100, Oldenburg, IN, 47036 (www.OldenburgFranciscans.org).

Sr. Mary Peter Sterwerf, age 83 of the Srs. of St. Francis, died Wednesday, December 11, 2013 at the convent. Born February 7, 1930 in Hamilton, Ohio, she is the daughter of Freda (Nee: Fallert) and Joseph Sterwerf. She entered the convent September... View Obituary & Service Information

The family of Sr. Mary Peter Sterwerf O.S.F. created this Life Tributes page to make it easy to share your memories.