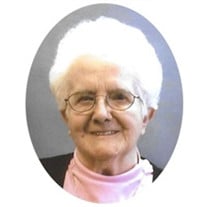 Sr. Geraldine Power, formerly Sr. Francis Leonette, age 99 of the Srs. of St. Francis in Oldenburg, died Friday, February 16, 2018 at the convent.  Born July 3, 1918 in Suttons Bay, Michigan, she is the daughter of Ruth (Nee: Steimel) and Harold Power.  Her father died suddenly of a heart attack at age 28, and her mother would later marry Harry Dearing Sr., and the family would move to Indianapolis.  She entered the convent September 8, 1935 and made her vows July 2, 1941.    After graduating from St. Mary Academy in 1935, Geraldine entered the Oldenburg Franciscans and moved to the convent and began her teaching career in Dayton, Ohio.  Her 32-year teaching career included schools in Ohio, Illinois, Indiana, and Missouri when she asked to leave religious life in 1967.  She continued teaching in the Indianapolis public school system until 1976 when she felt called to return to Suttons Bay, Michigan to care for her uncle.  While in Michigan Geraldine continued teaching in Catholic schools in Traverse City until 1978 when she was in a near-fatal accident.  After regaining her health, she was unable to teach on a full-time basis, and began working part-time at various jobs including as a pastoral minister, volunteer with the Michigan Migrant Program, as a Probate Court Volunteer for teenagers in trouble, and with the Traverse City State Hospital as a counselor.   Following the death of her uncle in 1984, Geraldine began to consider returning to the Oldenburg Franciscans.  In 1993 she made the transition back to religious life, and ministered as a Bibliotherapist providing library resources to the Sisters residing at the Motherhouse until her retirement. Geraldine summarized her life by saying, “As I enter the sunset of my life, I can see what blessings have been mine at every turn.  Difficulties along the way have each one led me to this time.  I am ready to move into the light and come to my Lord Jesus.”   She is survived by nieces and nephews.  In addition to her parents and step father, she is also preceded in death by sister Victoria Power; step sister Ruth Gray and step brothers Harry Jr., Victor, George, Frank, Patrick and John Dearing.  Visitation is Tuesday, February 20th, from 1 – 3 p.m. at the convent.  Funeral services follow with at 3 p.m. with Rev. John Geis officiating.  Burial will be in the convent cemetery.  Memorials may be made to the Srs. of St. Francis, P.O. Box 100, Oldenburg, Indiana, 47036 (www.OldenburgFranciscans.org).

The family of Sr. Geraldine Power O.S.F. created this Life Tributes page to make it easy to share your memories.