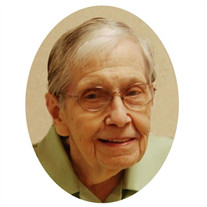 Sr. Rosemary Lee, formerly Sr. Damien Marie, age 96 of the Srs. of St. Francis in Oldenburg, died Thursday, August 30, 2018 at the convent. Born July 25, 1922 in Indianapolis, she is the daughter of Rose (Nee: Zimmer) and Joseph Lee, the youngest of 4 children. She wrote in her autobiography that she “loved sports because my brothers did and I was always in the cheering section for them.” She, herself, loved playing softball and two-handed touch football. It was at St. Mary’s Academy in Indianapolis she met the Franciscan Sisters and their example that had a lasting impression on her. Sr. Rosemary’s freshman retreat made her think about prayer and the direction her life might take. She felt she could always talk to the Sisters, who would answer her questions and assured her of continued prayers. Perhaps that is what led her to convent in 1940. Sr. Rosemary taught elementary school for 35 years in Indiana and Ohio before spending the last 18 years in the mailroom at Marian University in Indianapolis. The following is an excerpt from a feature story in the Marian Magnet: “Anyone who knows Sr. Rosemary Lee might think of her as the Master Sergeant of her domain – the mailroom. When students, faculty and staff members want to be sure their postage is correct, envelopes sealed or packages weighed accurately, they venture to Sr. Rosemary’s camp where they are sure to receive her reliable service and one-of-a-kind greetings.” While at Marian, it was obvious the she dearly loved the students. Friends describe her as pleasant, a woman of few words, but with a subtle humor and one who devoted much time to working for the poor. Other interests included crocheting, collecting stamps and collecting miniature international flags. Sr. Rosemary made beautiful hooked rugs as specialty and religiously attended a local craft fair the day after Thanksgiving. She is survived by nieces and nephews. In addition to her parents, she is also preceded in death by brothers Clarence, Anthony and George Lee. Visitation is Wednesday, September 5th, from 1 -3 p.m. at the convent. Funeral services follow at 3 p.m. with Rev. Robert Weakley O.F.M. officiating and burial will follow in the convent cemetery. Memorials may be made to the Srs. of St. Francis, P.O. Box 100, Oldenburg, Indiana, 47036 (www.OldenburgFranciscans.org).

Sr. Rosemary Lee, formerly Sr. Damien Marie, age 96 of the Srs. of St. Francis in Oldenburg, died Thursday, August 30, 2018 at the convent. Born July 25, 1922 in Indianapolis, she is the daughter of Rose (Nee: Zimmer) and Joseph Lee, the youngest... View Obituary & Service Information

The family of Sr. Rosemary Lee, O.S.F. created this Life Tributes page to make it easy to share your memories.