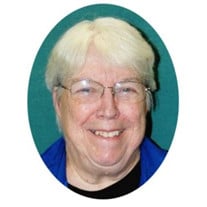 Sr. Sandra Schweitzer, formerly Sr. Mary de Paul, age 76 of the Srs. of St. Francis in Oldenburg, died Wednesday, May 8, 2019 at St. Francis Hospital in Greenwood, Indiana. Born May 19, 1942 in Cincinnati, Ohio, she is the daughter of Doris (Bruening) and Vincent Schweitzer. She was the second of three children. At the age of six, her father died during World War II. Widowed at age 32, Sr. Sandra’s mother worked hard to provide for her family as single parent. Growing up in the Northside neighborhood of Cincinnati, they would later move to the Monfort Heights neighborhood, where she would attend Our Lady of Angels High School and meet the Franciscan Sisters. She entered religious life hoping to use her skills as an artist. Making her final vows in 1966, she would earn a bachelor’s degree in art from Marian University, a master’s degree in art from Temple University and a liturgical design consultant certification from the Catholic Theological Union. Later she completed additional coursework in studio art at the University of Notre Dame and in liturgy and liturgical art at St. John’s University. Sr. Sandra taught at St. Mary’s Academy and at Marian University in Indianapolis, where she was chairwomen of the art department. Eventually she would accept the position of director of liturgical art for the Archdiocese of Indianapolis in addition to being an artist and liturgical design consultant at Studio Tau in Indianapolis. Her paintings have been exhibited across Indiana and the east coast, her graphic artwork has been featured in numerous publications and she has written several articles on liturgy art. Some of her greatest achievements, however, are her endeavors in liturgical design as she has collaborated in new architectural design and renovations in over 60 churches and chapels throughout the United States. The focus of her work has been on visual access to the divine, whether it is in paintings or where people gather to pray. In reflecting on her life as a Franciscan, Sr. Sandra once commented, “I recall the story of St. Francis of Assisi who heard the call “rebuild my Church” and then took to rebuilding churches, stone by stone. I do that now, as he did, only in the technical age which puts much of the rebuilding in the hands of architects and artists. Through blueprints and graph paper, committees and documents, I help to put the stones in place which form the environment in which people of God meet Him and one another in prayer.” Sr. Sandra is survived by her sister Mary Schweitzer and brother Michael Schweitzer. She is preceded in death by her parents. Visitation is Tuesday, May 14th from 1 -3 p.m. at the convent chapel. Funeral services follow at 3 p.m. with Rev. James Farrell officiating and burial will follow in the convent cemetery. Memorials may be made to the Sisters of St. Francis, P.O. Box 100, Oldenburg, Indiana, 47036 (www.OldenburgFranciscans.org).

Sr. Sandra Schweitzer, formerly Sr. Mary de Paul, age 76 of the Srs. of St. Francis in Oldenburg, died Wednesday, May 8, 2019 at St. Francis Hospital in Greenwood, Indiana. Born May 19, 1942 in Cincinnati, Ohio, she is the daughter of Doris... View Obituary & Service Information

The family of Sr. Sandra Schweitzer O.S.F. created this Life Tributes page to make it easy to share your memories.