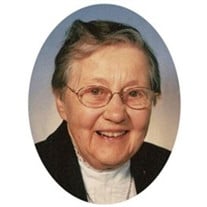 Sr. Millie Speed, formerly Sr. Charles Helene, age 93 of the Srs. of St. Francis in Oldenburg, died Tuesday, March 20, 2018 at the convent.  Born June 15, 1924 in Cincinnati, she is the daughter of Helen (Nee: Lehmkuhl) and Charles Speed. She was the third of five children.   Her two older brothers died before she was born and her father died suddenly shortly after the birth of her youngest brother, but she had fond memories of her father and how he took care of the family.  She attended St. Clement School in Cincinnati where she met the Sisters from Oldenburg.  She would graduate from the Immaculate Conception Academy in Oldenburg and entered the novitiate program at the convent.  She professed her final vows on August 12, 1945.      After earning her degree, she would spend the next 54 years teaching at schools in Illinois, Indiana, Montana and Ohio.  In 1996 she would leave the classroom and began a journey with the Navajo tribe in New Mexico, serving the very poor.  The Navajo were sheep herders and being confined to the reservation caused over grazing of the land leading to economic difficulties and making life difficult.  She observed, “There is an enormous struggle within the culture to maintain the Navajo identity.  Elders are worried because many of the young don’t speak Navajo or know traditional ways.”  She also noted that the schools were substandard and the people fell far below the poverty line set by the government.  But, because the Navajo are spiritual people, hope lives on.  She retired to the motherhouse in 2005 where she helped coordinate the efforts of the Convent’s Little Portion Club.  She returned to visit her Navajo “family” as her health permitted.   She is survived by nieces and nephews.  In addition to her parents, she is also preceded in death by her brothers Norbert, Charles, Joseph (Walt) and James Speed.  Visitation is Friday, March 23rd, from 1 – 3 p.m. at the Srs. of St. Francis Chapel.  Funeral services follow at 3 p.m. with burial in the convent cemetery.  Memorials may be made to the Srs. of St. Francis, P.O. Box 100, Oldenburg, Indiana, 47036.

Sr. Millie Speed, formerly Sr. Charles Helene, age 93 of the Srs. of St. Francis in Oldenburg, died Tuesday, March 20, 2018 at the convent.  Born June 15, 1924 in Cincinnati, she is the daughter of Helen (Nee: Lehmkuhl) and Charles Speed. She... View Obituary & Service Information

The family of Sr. Millie Speed created this Life Tributes page to make it easy to share your memories.

Send flowers to the Speed family.