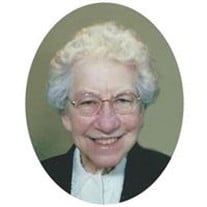 Sr. Jacinta Stein, age 84 of the Srs. of St. Francis in Oldenburg, died Sunday, April 5, 2015 at the convent. Born April 10, 1930 in Cincinnati, Ohio, she is the daughter of Isabella (Nee: Boller) and William Stein. Sr. Jacinta entered the convent October 3, 1947 and made her final vows August 12, 1953. An elementary teacher for over 50 years, schools included Little Flower, St. Monica's, St. Lawrence and Our Lady of Lourdes in Indianapolis, St. Mary's in Greensburg, Indiana, St. Vincent de Paul in Bedford, Indiana, St. Mary's in Aurora, Indiana, Holy Trinity in St. Louis, Missouri, Immaculate Conception in Old Monroe, Missouri, St. Ann's in Hamilton, Ohio, St. Anthony's in Dayton, Ohio, St. Francis Seraph and St. Joseph's in Cincinnati, Ohio. Sr. Jacinta grew up in a family of eleven during the depression. She would attend Woodward High School where she and her sisters were part of a co-op program providing both education and employment opportunities which helped support the family while three of their brothers were serving in World War II. Her family often visited an aunt who was a member of the Srs. of Notre Dame leading to a desire to seek a religious vocation. Through the Franciscans at Our Lady of Perpetual Help Parish, she decided to join the convent. She would earn a BS in Education from Marian University and an MS in Education from the University of Dayton. She would also serve as a CCD instructor, Director of Liturgy, Eucharistic Minister, Lector and Cantor for several parishes. She designed and presented workshops for parishes and deaneries about liturgical ministers and established audio/visual libraries for various schools. Sr. Jacinta once commented "I thank God that He has called me to be an Oldenburg Franciscan, from where all my ministry and life flows." Declining heath in recent years kept her from living the vibrant life she was used too. Sr. Jacinta is survived by sisters Sr. Rita Stein S.N.D., Joan Brassfield and Betty Seay, all of Cincinnati, Marianna Hungler of Fairfield, Ohio and brother William Stein of Cincinnati. In addition to her parents, she is also preceded in death by sister Ruth Conroy and brothers Richard, Robert Carl and James Stein. Visitation is Wednesday, April 8th, from 1 - 3 p.m. at the convent chapel. Funeral services follow at 3 p.m. with Rev. Bob Weakley O.F.M. officiating. Burial will be in the convent cemetery. Memorials may be made to the Srs. of St. Francis, P.O. Box 100, Oldenburg, IN, 47036 (www.OldenburgFranciscans.org).

Sr. Jacinta Stein, age 84 of the Srs. of St. Francis in Oldenburg, died Sunday, April 5, 2015 at the convent. Born April 10, 1930 in Cincinnati, Ohio, she is the daughter of Isabella (Nee: Boller) and William Stein. Sr. Jacinta entered the... View Obituary & Service Information

The family of Sr. Jacinta Stein O.S.F. created this Life Tributes page to make it easy to share your memories.