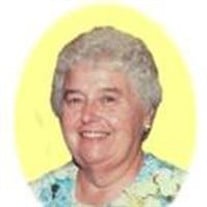 Sr. Rosemary Stewart O.S.F., formerly Sr. Martha Clare, age 79 of the Srs. of St. Francis in Oldenburg, Indiana, died Sunday, September 5, 2010 at the convent. Born May 5, 1931 in Cincinnati, Ohio, she is the daughter of Martha (Nee: Kruthaupt) and William Stewart.She entered the convent September 10, 1949 and made her final vows August 12, 1955. Sr. Rosemary spent 49 years in education as a teacher and principal in Indiana at Our Lady of Lourdes in Indianapolis, St. Gabriel’s in Connersville, St. Louis School in Batesville, St. John’s in Dover, St. Peter’s in St. Peter, St. Lawrence in Lawrenceburg as well as St. John’s in Middletown, Ohio and St. Anthony’s in Dayton Ohio. In 1972 she became a special education instructor and taught at Marian College in Indianapolis and St. James and St. Aloysius in the Cincinnati area. In recent years she became Director of Religious Education at St. John’s in Dover, Indiana and St. Peter’s in St. Peter, Indiana. She also was caretaker at a group home in Cincinnati. She retired to the Motherhouse in 2000.Sr. Rosemary is survived by her brother James Stewart of Louisville, Kentucky as well as nieces, nephews and cousins. In addition to her parents, she is also preceded in death by her brother William Stewart.Visitation is Thursday, September 9th, from 9-11 a.m. at the Motherhouse chapel. Funeral services follow at 11 a.m. with Rev. Carl Hawver O.F.M. officiating and burial in the convent cemetery. Memorials may be made to the Srs. of St. Francis, P.O. Box 100, Oldenburg, IN, 47036. (www.OldenburgFranciscans.org).

The family of Sr. Rosemary Stewart, O.S.F. created this Life Tributes page to make it easy to share your memories.