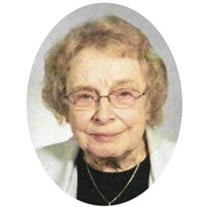 Sr. Adele Zahn, formerly Sr. Mary Karen Zahn, age 98 of the Srs. of St. Francis in Oldenburg, died Wednesday, January 24, 2018 at the convent.  Born May 12, 1919 in Dayton, Ohio, she is the daughter of Marie (Nee: Hoefler) and Edward Zahn.  She was the second of three children.   Her father was an aeronautical engineer at Wright-Patterson Air Base, while her mother was at home raising the family.  She attended St. Anthony’s School in Dayton and would graduate from the Immaculate Conception Academy in Oldenburg.  The presence of the Franciscan Sisters throughout her schooling influenced her decision to enter the convent in 1937.  A graduate of the Atheneum of Ohio Teachers College in Cincinnati, Sr. Adele pursued post graduate studies in French at Marian College in Indianapolis and French Literature at the University of Cincinnati.  She would eventually earn her Master and Doctorate degrees in French from Fordham University in New York.   After teaching at Our Lady of Angels High School in Cincinnati and Immaculate Conception Academy in Oldenburg, she would go onto a 55 year career at Marian University in Indianapolis.  She went from a Professor of Literature, French and Humanities, to Academic Dean, Dean of Students and Professor of Courses in the Honors Program.  In 1991 Sr. Adele was made Professor Emeritus, serving part time before retiring in 2009. She dedicated her life to learning and educating.  In later years, when asked how she came to recognize her call to religious life, she responded, “God works in His own good ways and times.  He led the way and I was always ready to follow.”  She leaves a legacy of having influenced thousands of students.   She is survived by cousins.  In addition to her parents, she is also preceded in death by her sister Virginia Zahn and brother Br. Edward Zahn SM.  Visitation is Monday, January 29th, from 1 – 3 p.m. at the convent.  Funeral services follow at 3 p.m. with Rev. Bob Weakley O.F.M. officiating and with burial in the convent cemetery.  Memorials may be made to the Srs. of St. Francis, P.O. Box 100, Oldenburg, Indiana, 47036 (www.OldenburgFranciscans.org).

The family of Sr. Adele Zahn O.S.F. created this Life Tributes page to make it easy to share your memories.