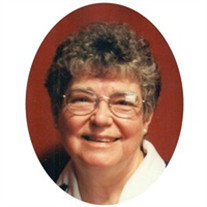 Sr. Stephanie Zimmer, age 86 of the Srs. of St. Francis in Oldenburg, died Tuesday, December 5, 2017 at the convent.  Born September 18, 1931 in Indianapolis, she is the daughter of Magda (Nee: Blunck) and August Zimmer.  The youngest of four, she grew up on Raymond Street in Indianapolis.   She attended St. Catherine of Sienna grade school where she was taught by Sisters of Providence and Sr. Stephanie noted, “I suppose that is here that the growing seeds of a religious vocation first pushed their way above ground.”  She would go on to attend St. Mary Academy where she met the Sisters of St. Francis and commented, “Something in those sisters spoke to me! I knew nothing about St. Francis, but there was a spirit at St. Mary’s that I had never known before and it was good!”  During her senior year her dream of religious life took focus as she was awarded a scholarship to attend Marian College.  Mid-way through her freshman year at Marian, she applied for admission to the Sisters of St. Francis and began her religious life.    A teacher, she taught at schools in Indiana, Ohio and Michigan.  Photography would become a favorite hobby that she pursued in later years.  To her, “A picture is beauty immortalized.”  Her ability to capture photos of nature delighted all at the convent and especially those sisters who could no longer enjoy the beauty of the outdoors.  Her pictures have been featured on Oldenburg greeting cards as well as winning “Best of Show” at the Oldenburg Freudenfest.   Sr. Stephanie shared a memory of how her family gathered around the player piano their living room at Christmas to sing  carols as she and her siblings took turns feeding the music rolls and pumping the pedals to make the wonderful music.  No gifts could be handed out until they had played and sung all of their Christmas carols.  There were times when they were caught deliberately trying to speed up the music to get to their presents.  In later years she would learn to play the piano, and in her heart, she would relive those treasured family Christmas gatherings around the piano.   She is survived by four nieces.  In addition to her parents, she is also preceded in death by sister Anna and brothers Henry and George.  Visitation is Monday, December 11th, from 1 -3 p.m. at the convent.  Funeral services follow 3 p.m. with Rev. Robert Weakley O.F.M. officiating, followed by burial in the convent cemetery.  Memorials may be made to the Srs. of St. Francis, P.O. Box 100, Oldenburg, IN, 47036 (www.OldenburgFranciscans.org).

Sr. Stephanie Zimmer, age 86 of the Srs. of St. Francis in Oldenburg, died Tuesday, December 5, 2017 at the convent.  Born September 18, 1931 in Indianapolis, she is the daughter of Magda (Nee: Blunck) and August Zimmer.  The youngest of four,... View Obituary & Service Information

The family of Sr. Stephanie Zimmer O.S.F. created this Life Tributes page to make it easy to share your memories.