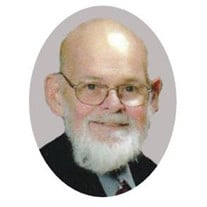 Stephen G. Baer, age 69 of Batesville, died Thursday, September 20, 2018 at the Waters of Batesville. Born April 1, 1949 in Wichita, Kansas, he is the son of Geneva (Nee: Langford) and Howard Baer Sr. He served 20 years in the Navy as an Operations Specialist and after his Naval career he would spend 13 years with Hill-Rom as a truck driver. He married Mary Wolfe February 20, 1982 in Charleston, South Carolina. Stephen had many interests with camping and gardening among his favorites. He loved his dog Mac, was a Kansas City Chiefs fan and enjoyed making hand crafts. He and Mary took several cruises with a trip to the Caribbean among their favorites. Faith was important to Stephen. He was a member of the Bright Christian Church and former member of the Board of Directors for the Southeastern Indiana Walk to Emmaus. His true passion was being with his grandkids. A cancer survivor, he often said, “I joined the Navy to see the world and drove a truck for Hill-Rom to see the country.” He is survived by his wife Mary; daughters Stephanie Buckley of Purcellville, Virginia, Nicole Deacon of Ashburn, Virginia, Tracy Fullenkamp of Oldenburg, son Adam Russell of Lawrenceburg, Indiana; sister Beverly Noel of San Antonio, Texas; brothers Howard Baer Jr. of San Antonio, Texas, Ted Baer of Independence, Missouri and grandchildren Eykis, Wyatt, Logan, Brett, Karstyn and Braxtyn. In addition to his parents, he is also preceded in death by sisters Sr. Barbara Baer OSJ and Jeanne Sears, and infant brother Joe Baer. Stephen’s wishes were to donate his body to science at the University of Cincinnati. On Sunday, September 30, a memorial service will be held at 2:30 p.m. at Bright Christian Church in Bright, Indiana. The family will receive friends at the church prior to services from 1 – 2:30 p.m. The family requests memorials to the Disabled American Veterans (https://secure.dav.org/donate) or Wounded Warrior Project (https://support.woundedwarriorproject.org).

Stephen G. Baer, age 69 of Batesville, died Thursday, September 20, 2018 at the Waters of Batesville. Born April 1, 1949 in Wichita, Kansas, he is the son of Geneva (Nee: Langford) and Howard Baer Sr. He served 20 years in the Navy as an Operations... View Obituary & Service Information

The family of Stephen G. Baer created this Life Tributes page to make it easy to share your memories.

Send flowers to the Baer family.