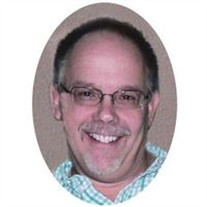 Steven P. Wintz, age 56 of Batesville, died Thursday, April 6, 2017 at Christ Hospital in Cincinnati. Born May 22, 1960 in Batesville, he is the son of Geraldine (Nee: Goyert) and Robert Wintz. He married Tammi Blair June 15, 1985 at St. Anthony’s Church in Morris. He was manager of the Batesville Water Utility and was with them 39 years as well as a member of St. Louis Church. When you’d see Steve, it was probably on his bike, walking or on his motorcycle. Although he’s been across the country on his motorcycle, you’d typically see him on his bike, riding to and from work as well as in the evenings after work with his grandson. During the summer months he and Tammi could often be seen on the walking paths around town and he’d go hiking in the mountains whenever he had the chance. His family teased that he didn’t like having to pay to have something done so, from remodeling a house to working on and restoring cars, there wasn’t much he couldn’t do. Family was important to Steve. He enjoyed camping and his family fondly remembers yearly trips to Myrtle Beach during fall break and St. Joseph, Michigan during the summer. He was able to coach Becca in basketball from fourth grade until high school and never missed a game. Friday night’s he and Tammi would go to the movies usually letting Tammi pick what they’d see. The recent birth of their first grandchild made Steve a proud grandpa and little Bronson stole his heart. Steve is survived by his wife Tammi; daughters Allison (William) Baum of Batesville, Becca Wintz of Tucson, Arizona, Brooke Wintz of Batesville; son Jason (Billeigh) Wintz of Reno, Nevada; parents Geraldine (Jerry) and Bob Wintz; sister Joanne Dickman; brothers Jim and Sam Wintz, all of Batesville; grandson Bronson Baum as well as numerous nieces and nephews Visitation is Tuesday, April 11th, from 4 – 7 p.m. at the funeral home. Funeral services are 10 a.m. Wednesday, April 12th, at St. Louis Church with Rev. Shaun Whittington officiating. It was Steve’s wishes to be cremated following services and a private committal will be held. The family requests memorials to the Batesville Parks Department or Batesville Rescue 10.

The family of Steven P. Wintz created this Life Tributes page to make it easy to share your memories.