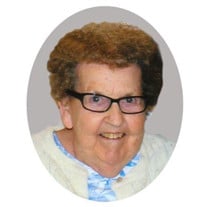 Thelma C. Grossman, age 82 of Fishers, Indiana and formerly of Batesville, died Tuesday, November 10, 2020 at Prairie Lakes Health Campus in Noblesville, Indiana. Born August 21, 1938 in Decatur County Indiana, she is the daughter of Mathilda (Nee: Gauck) and Frank Wolter. She married Leroy Grossman July 1, 1967 at St. Maurice Church in St. Maurice, Indiana and he preceded her in death November 13, 2007. She worked in the kitchen at the Srs. of St. Francis Convent 25 years before retiring in 2007 and was a member of the Daughters of Isabella. While Thelma loved watching sports in general, she was an avid Colts, Notre Dame and Reds fan. She was thrilled several years ago to be chosen for a tour of the Red’s ballpark, meet the players, coaches and the radio broadcast crew as well as getting to throw out the first pitch. Other interests included reading adventure and mystery stories, sitting on the back porch watching the birds, a version of dominoes called Mexican Train and playing cards. She was a longtime member of two card clubs in Batesville and liked playing hand and foot with her family. Her family would often spoil Thelma with some of her favorites, bringing her tomatoes when in season, ice cream and fried chicken. She is survived by daughters Maria Grossman of Fortville, Indiana, Valerie Davenport of Indianapolis; sister Evelyn Kiefer of Westport, brother Louis Wolter of Napoleon and grandchildren Alec Grossman, Katlyn Grossman and Sascha Davenport. In addition to her husband and parents, she is preceded in death by sister Dorothy Bicknell and brothers Carl, Norbert, Alvin, Bernard and Martin Wolter. Visitation is Monday, November 16th, from 10 – 10:45 a.m. at the funeral home. Funeral services will follow at 11 a.m. at St. Louis Church with burial in the church cemetery. The family requests memorials to Oldenburg Academy.

The family of Thelma C. Grossman created this Life Tributes page to make it easy to share your memories.

Thelma C. Grossman, age 82 of Fishers, Indiana and formerly of...

Send flowers to the Grossman family.