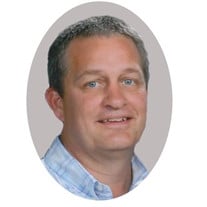 Thomas A. “Fardo” Vogelsang, age 54 of Oldenburg, died Tuesday, November 13, 2018 at St. Vincent’s Hospital in Indianapolis. Born June 1, 1964 in Batesville, he is the son of Mary (Nee: Walke) and Marvin Vogelsang. He married Brenda Moeller September 9, 1989 and she preceded him in death September 15, 1993. On September 23, 2000 he married Laura Amberger at St. Louis Church in Batesville. He was a supervisor for Bed Techs 13 years and a member of the Knights of Columbus Council #1461. Family was extremely important to Tom. He loved nothing better than being with his boys, watching them play sports and coaching them. A talented woodworker, he enjoyed spending time in his shop. Pieces of his furniture can be found throughout his home and other family member’s homes. Tom was a fan of I.U. basketball, the Colts, the Reds and oldies rock and roll. He liked cruising the back roads as well as spending time at “the land.” His family also shared that Tom will be missed by his faithful dog Belle and that an occasional cold Miller Lite draught was a good thing. He is survived by his wife Laura; sons Alex of Batesville, Evan, Adam and Eli, all of Oldenburg; sister Debbie Amberger of Batesville; and brothers David “Frank” Vogelsang of St. Leon, Indiana, Gary "Paco" Vogelsang of Monticello, Indiana, Ron “AJ” Vogelsang and John “Tiggs” Vogelsang, both of Batesville. He is preceded in death by his first wife Brenda and parents Mary and Marvin Vogelsang. Visitation is Friday, November 16th, from 4 – 7 p.m. at the funeral home. Funeral services are 10 a.m. Saturday, November 17th at Holy Family Church in Oldenburg with Rev. Ric Schneider O.F.M. officiating. Burial will follow in the church cemetery. The family requests memorials to the Vogelsang Boys Education Fund or the Brenda Vogelsang Foundation.

The family of Thomas A. "Fardo" Vogelsang created this Life Tributes page to make it easy to share your memories.

Send flowers to the Vogelsang family.