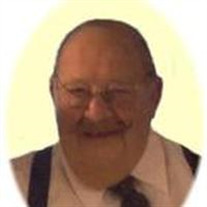 Victor O. Struewing, age 76 of Batesville, died Thursday, April 24, 2014 at University Hospital in Cincinnati. Born January 13, 1938 in Batesville, he is the son of Philomena (Nee: Pitstick) and Otto Struewing. He married Mary Ann Weberding April 14, 1962 at St. Charles Church in Milan, Indiana. Vic served in the army reserves and went on to work 43 1/2 years at Batesville Casket Company as a truck driver before retiring in 2000. He was a member of Holy Family Church in Oldenburg. He dearly loved his grandchildren and relished having them around. Not far behind was Lucy, his toy terrier and he delighted in spoiling them all. In his younger days, Vic was an avid rabbit and squirrel hunter. Some of the boys remember dad calling school to let them know he was taking them on a “field trip” so they could hunt with him. He developed an appreciation for nature and the outdoors and would often share with his family some of the animals he’d spot during a ride in the country or a trip to the city. This is perhaps what led to the purchase of the family pet, Sylvester the donkey. His family teased that while dad “was a meat and potatoes guy, they got a kick out of the fact that he fancied himself a bit of an amateur food critic. They also mentioned his fifty plus year subscription to the National Geographic as well as enjoying a cold beer or a good glass of scotch. And as the kids got older, they learned to appreciate they didn’t necessarily get what they wanted; instead they got what they needed, whether that was “a kick in the pants or sound advice.” Vic is survived by his wife Mary Ann; daughter and son-in-law Amy and Mike Jones of Oldenburg; sons and daughter-in-laws John and Lisa of Batesville, Roger and Tracy of Batesville, Greg and Mandi of Oldenburg, Mike and Lisa of Batesville, Mark and Tasha of Hamburg; grandchildren Kara, Chris, Jared, Gus, Laine, Jack, Sara, Chad, Corey, Reed, Onika, Eva, Lila and great granddaughter Jema. In addition to his parents, he is also preceded in death by his sisters Viola Fehrman, Dolores Wissel, Marjorie Flodder, Virginia Buescher and brother Leroy. Visitation is Monday, April 28th, from 4 – 7 p.m. at the funeral home. Funeral services are 10 a.m. Tuesday, April 29th at Holy Family Church with Rev. David Kobak O.F.M. officiating. Burial will follow in the church cemetery. The family requests memorials to the Holy Family Religious Education Fund or the American Diabetes Association.

The family of Victor O. Struewing created this Life Tributes page to make it easy to share your memories.

Send flowers to the Struewing family.