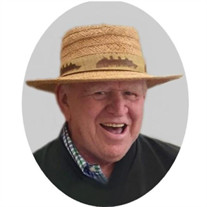 William Michael Fisher; just Bill to his friends, or, to some of his more chronologically enhanced friends, Pinky (due to his fiery red hair growing up), passed away on Saturday, June 26th in Tucson, AZ. Bill was 85 years young, born and raised in Batesville, where he spent all but the last few months of his life. Bill attended St. Louis Catholic School and Batesville High School, graduating in 1953. After high school, Bill served in the United States Army, from which he earned his Honorable Discharge in 1963. Bill went to work for Hill-Rom Industries, where he was introduced to Rosemary Zimmerman, who would be the love of his life. The two were married in September of 1958, becoming the parents of three children, and stayed together for the next 60 years, until Rosemary’s own passing in 2019. Bill started in the mailroom at Hill-Rom, working his way up to the role of salesman. He became a regional sales manager, and eventually the national sales manager. He retired in 2000 as a national vice president after spending 44 years with the company. Besides his work, Bill was involved in many activities and organizations throughout his lifetime in and around Batesville. This included the Batesville Jaycees, the Knights of Columbus, and the Batesville Kiwanis Club. Although many people had no idea, Bill was also a contributing columnist for the Batesville Herald from 1996 through 2009. He always dreamed of being a writer, and blessed the citizens of Batesville with his words on a weekly column under his pen name, Harlan Roberts, titled “People, Places and Things”. Bill was also called into service as a golf coach at St. Louis Catholic School when the team was formed for 7th and 8th grade students. An avid golfer himself, he thoroughly enjoyed helping the kids with their game and getting them to the various matches in which they competed. In the mid-2000’s, Bill became the head golf coach for the Oldenburg Academy Lady Twisters. During his final coaching season, the Lady Twisters advanced all the way to the Regional Finals. As much as Bill loved to play golf, I truly think the happiest days he ever spent on the golf course were when he was walking with the girls and watching them compete. But that wasn’t the only help he provided the girls of Oldenburg Academy. As one of his former students put it: “Instead of saying, ‘All I need to know I learned in kindergarten’, I say, ‘All I need to know I learned on the golf course with Mr. Fisher.’” But all of his many activities had to be worked around his lawn mowing, yard work and flower tending, of course. No one worked harder than Bill Fisher to maintain a manicured yard, complete with numerous varieties of flowers, vegetables, and trees. But even his time in the yard took a backseat to his children and grandchildren. Whether it be in the stands, the auditorium, or on the coaching staff, Bill was there for every kid’s game, play, and school function. His three children grew up happy, successful, and incredibly loved. Bill is grieved and remembered by all his numerous friends and family. He is survived by his daughters Sandra Greenwell of Tucson, Arizona and Amy Jennings of Ft. Wayne, Indiana; son Timothy Fisher of Morrow, Ohio; sister Greta Solgere of Greensburg, Indiana; Four grandchildren. Bill was preceded in death by his parents Aloysius and Rose (Nee: Benz) Fischer, wife Rosemary and brother Tom Fisher. A memorial service and Celebration of Life will be held in Batesville at a later date.

William Michael Fisher; just Bill to his friends, or, to some of his more chronologically enhanced friends, Pinky (due to his fiery red hair growing up), passed away on Saturday, June 26th in Tucson, AZ. Bill was 85 years young, born and raised... View Obituary & Service Information

The family of William M. "Pinky" Fisher created this Life Tributes page to make it easy to share your memories.

William Michael Fisher; just Bill to his friends, or, to some...

Send flowers to the Fisher family.