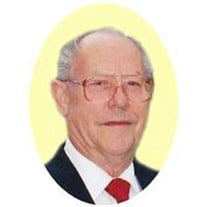 William H. Stein Sr., age 90 of Batesville, died Sunday, November 8, 2015 at Christ Hospital in Cincinnati. Born January 2, 1925 in Franklin County Indiana, he is the son of Mary (Nee: Ortman) and Anthony Stein. He married Elizabeth Vierling June 28, 1947 at St. Louis Church. Bill served in the Navy during World War II earning nine Bronze Stars in the American Asiatic Pacific Theater and two Bronze Stars during the Philippine Liberation. After the service, Bill would work at the Hill-Rom Company for 48 years, retiring as Production Supervisor. He was a member of the Batesville V.F.W. Post #3183 and the Prell-Bland American Legion Post #271 as well as St. Louis Church. Although not much for fishing, Bill loved to hunt. A long standing family tradition was to take the boys rabbit and squirrel hunting Thanksgiving morning, returning home in time to clean their game before dinner was ready. He also loved woodworking which was a lifelong passion. Bill and Betty traveled quite a bit, getting to see much of the country. Being a Civil War buff, those trips that included a stop or side trip for anything civil war related were a plus. Although not a huge sports fan in general, he loved watching his kids participate in their chosen sports through high school and watching the neighborhood ball games on the then vacant lot behind the house. Bill also enjoyed the simpler things in life as well. He would spend countless hours relaxing on the back porch where he and Betty would feed the birds, squirrels and any other fury friends that came. Another favorite pastime was to get into the car and go for rides around the countryside or as Bill called it, "God's country." He is survived by his wife Betty; daughters Mary (Kenny Peetz) Starost of Oldenburg, Cheryl Bitterman of West Chester, Ohio, Melissa (Keith) Bradley of Sunman; sons William Jr. (Judy) of Oldenburg, Gregory (Susan) of Summerville, South Carolina, Thomas (Ginger) of Annville, Pennsylvania, David (Bethsabe) of New Baltimore, Michigan, Mark (Wendy) of Carmel, Indiana, Larry (Susan) of Noblesville, Indiana, Michael (Teri) of Fairfield, Ohio, 36 grandchildren and 38 great grandchildren. In addition to his parents, he is also preceded in death by his step mother Margaret Stein, grandson Joel Stein and brother Joseph Sr. Visitation is Wednesday, November 11th, from 4 - 7 p.m. at the funeral home. A rosary service will be held at 4 p.m. Funeral services are 10 a.m. Thursday, November 12th, at St. Louis Church with Rev. Stan Pondo officiating. Burial will follow in the church cemetery with military rites conducted by the Batesville V.F.W. and the Prell-Bland American Legion. The family requests memorials to the St. Louis Cemetery Fund or the American Diabetes Association.

The family of William H. Stein Sr. created this Life Tributes page to make it easy to share your memories.

Send flowers to the Stein family.